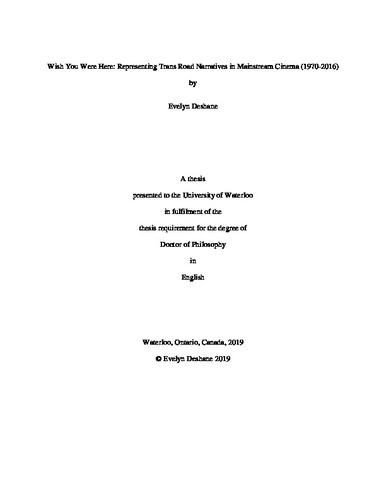 When Christine Jorgensen stepped off a plane in New York City from Denmark in 1952, she became one of the first instances of trans celebrity, and her intensely popular story was adapted from an article to a memoir and then a film in 1970. Though not the first trans person recorded in history, Jorgensen's story is crucial in the history of trans representation because her journey embodies the archetypal trans narrative which moves through stages of confusion, discovery, cohesion, and homecoming. This structure was solidified in memoirs of the 1950-1970s, and grew in popularity alongside the booming film industry in the wake of the Hays Production Code, which finally allowed directors, producers, and writers to depict trans and gender nonconforming characters and their stories on-screen. From Jorgensen’s adaptation came the often medically focused films of the 1970s, which turned more exploitative and violent as the trans character became a criminal, killer, or monster in films of the 1980s and the early 1990s, and made especially popular through the creation of Buffalo Bill in The Silence of the Lambs. For the rest of the 1990s and into the early 2000s, the rise of academic gender theory along with the activism by trans writers and scholars led to more progress in academic sphere, some of which was only minimally represented on-screen in popular films. In this era of film-making, the trans character often became a misunderstood and misrepresented comedy figure and a temporary joke who would soon fade by the end of the film. In the current age of the transgender tipping point, trans characters are more visible than ever before, in both popular media and independently produced films, but as I document in this dissertation, there is still a large gap from the real-life event which may have sparked the story, and what is represented on the mainstream film screen itself, especially when created by cisgender writers, directors, and producers. In this dissertation, I argue that the array of trans experiences represented on the popular Hollywood screen derive much of their cultural signification from historical events occurring around the same time period of the film, such as Jorgensen's flight and return, the rise of drag culture in the 1990s, or the trans YouTube community in our current era. I use film adaptation theory and trans history to examine how those producing and consuming the film have read—or misread—its original source. I then trace the meanings that these films have created within the popular culture, and how their circulation has helped—or hindered—trans understanding in a broader social and political world. I also argue that each one of these popular films uses the archetypal trans narrative structure of confusion, discovery, cohesion and homecoming, which then fundamentally links these stories to the American cultural ethos of freedom, transformation, and independence, especially when these narratives involve travel in some way, such as Jorgensen's first flight. This dissertation explores the intersection between the American road narrative and the trans travel narrative as expressed by trans authors and does so as a way to integrate more gender diverse representation into the American cultural canon, as well as document the important role trans, non-binary, and gender nonconforming people have had on American history and popular culture.