Environmental Engagement and Generation Z: Evaluating and Modifying the YEEP Framework Against Research and Observations on Generation Z Youth and Youth Leaders 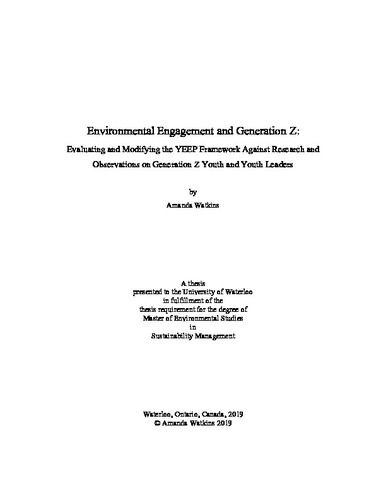 In October 2018, the United Nations Intergovernmental Panel on Climate Change (IPCC) announced that the global community has 12 years to stop the rapid growth of climate change and avoid increased threats of drought, flooding, and extreme heat, affecting millions of people. During this 12-year timeframe, millions of children, teenagers, and adolescents will come of age as voters and members of the workforce. Generation Z, the emerging group of youth we see today, will be the change makers during these pivotal years of climate change adaptation. Born post-Internet after 1996, the Internet Generation, iGen, Centennials, or Generation Z, consists of approximately 7.3 million people in Canada, and 65 million people in the United States. Generation Z first began to enter the labour force in 2014, when its oldest members turned 18, and they will continue to enter the labour force until 2029 and beyond, as younger members age into adulthood and complete post-secondary studies. In 2014, Riemer, Lynes and Hickman published the Youth-Based Environmental Engagement (YEEP) framework to help guide the further development of informal environmental education programs for emerging adults. This research evaluates the YEEP framework against current literature on Generation Z attitudes and behaviour, as well as an existing youth engagement program that successfully works with Generation Z participants, the Peel Environmental Youth Alliance (PEYA) in the Region of Peel, Canada. The research finds that the YEEP framework could be strengthened to successfully target Generation Z participants through a greater inclusion of questions that address the tech-savvy nature of this generation, the threats and benefits that come with this technology, as well as the generation-specific values that require an emphasis on practical and emotional skills-building opportunities.