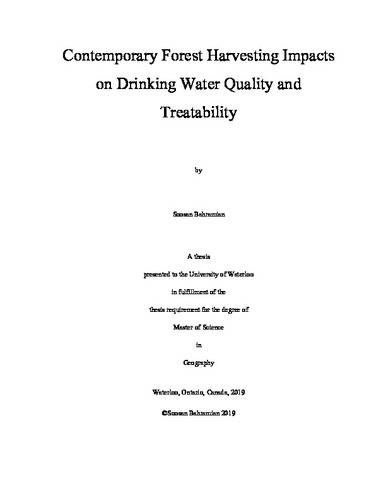 Forested watersheds supply ~75% of global accessible freshwater resources and serve as important sources of drinking water. Both natural and anthropogenic landscape disturbances in these regions can deteriorate water quality in downstream environments. Climate change-exacerbated increases in the frequency and severity of disturbances such as wildfires, floods, and hurricanes threaten global drinking water security because the deterioration and/or increased variability of drinking water source quality can challenge treatment plants beyond their design and/or operational capacity, resulting in increased infrastructure and operating costs, servies disruptions or potentially catatrophic service outages. The water quality impacts of such events can last for decades; thus, risk reduction startegies must be developed to ensure the uninterrupted provision of adequate amounts of safe drinking water. Althgouh forests have not been historically managed for water, forest harvesting has been proposed for pre-emptive mitigation of severe natural disturbance effects on source water quality and treatability; Depending on how it is implemented, however, it can also deteriorate source quality. Critically, the impacts of forest harvesting on drinking water treatability have not been investigated. Thus, the focus of this research was to investigate the impacts of contemporary forest harvesting on drinking water source quality and treatability. Three types of contemporary forest harvesting (clear-cut with patch retention, strip-shelterwood cut, and partial cut) were investigated at the watershed-scale over a range of flow conditions in the eastern slopes of the Rocky Mountains of southwestern Alberta, Canada. Reference and harvested stream water turbidity and various water quality metrics related to NOM (and associated DBP formation potentials) were evaluated during and over the first three post-harvest years. The correlations between THM- and HAA-FPs and several proxy indicators (particularly, aromaticity) were also investigated. Reported pre-disturbance data from the study watersheds were included in this analysis. Notably, no appreciable impacts of forest harvesting on water quality and treatability were observed during the harvest and three post-harvest years. Thus, contemporary forest harvesting approaches coupled with state-of-the-art BMPs for erosion control show promise as “green” source water protection (SWP) technologies for mitigating severe disturbance risks to drinking water treatability, even in source water regions rich with glacially-derived fine sediments (e.g., many parts of western North America). To maximize the impacts of forest management-based approaches to SWP and to develop climate change adaptation strategies—in lieu of traditional landscape-level, time series trend monitoring—focused paired catchment investigations that are designed as before-after-control-impact (BACI) studies are urgently needed.