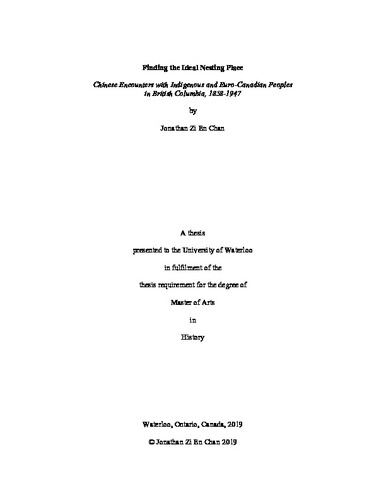 Since the conclusion of the First Opium War (1842) when the ports of China were forced open by the British, adventurous Chinese emigrants traded their dismal prospects at home for British Columbia—a foreign land of opportunities that was also Indigenous territory. This thesis examines the cultural, economic, and ethnic interactions between the Chinese, their Indigenous hosts, and their Euro-Canadian neighbours in British Columbia from 1858 to 1947. White society employed Chinese labour to develop the infrastructure and economy of British Columbia, but the Chinese were then excluded from the new society for which they had toiled. To create a white British Columbia, the state implemented assimilation policies to control Indigenous populations, but claimed that the Chinese were unable to assimilate and sought to exclude them completely. Euro-Canadian society used stereotypes such as opium abuse, lack of hygiene, immorality, and wage undercutting to justify exclusionary policies against the Chinese and to reinforce ideas of their unassimilability. These stereotypes also served as justification for the legal harassment of Chinese livelihoods through legislation that targeted specific classes of Chinese businesses in various locales. This thesis argues that despite ongoing discriminatory policies, the Chinese showed agency in resisting exclusion and economic marginalization. In some cases, the Chinese formed even formed partnerships with Indigenous peoples and gained support from parts of Euro-Canadian society to challenge the policies that were designed to exclude them.