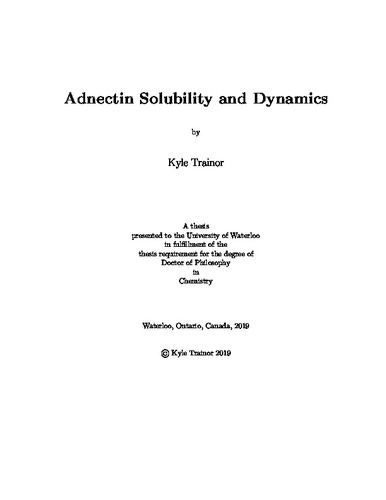 Rapid growth of the global market for monoclonal antibodies (mAbs) has generated considerable interest in the development of alternative molecules that facilitate rapid discovery and manufacturing, while replicating the low toxicity/immunogenicity and tight, specific binding of mAbs. One such molecule is the tenth human fibronectin type III domain (10Fn3), which has solvent accessible loops resembling the VH complementarity-determining regions H1, H2, and H3 of immunoglobulin. 10Fn3-based binding proteins called Adnectins have been engineered to bind with high affinity to diverse targets using in vitro evolution methods such as mRNA display, yeast display, and phage display. Adnectins are known to vary in aggregation propensity, sometimes despite exceptionally high amino acid sequence identity, and have been used as a basis for protein aggregation/solubility research. Aggregation of therapeutic proteins can provoke a protein-specific immune response, and the solubility of Adnectins is therefore of immediate practical interest. The aggregation of proteins in general is a complicated and incompletely understood phenomenon, the study of which we advance using Adnectins as a model system. We also investigate protein dynamics (which can be related to protein aggregation, but additionally has enormous impact on how we think about protein structure and function) through nuclear magnetic resonance (NMR) spectroscopic and computational study of Adnectins. Here, we first present solubility data for a reference set of 41 Adnectins and use them to screen computational solubility/aggregation prediction methods. On the basis of these results, we select the CamSol prediction method for use in a protein engineering project that applies the principles of consensus design to enhance the solubility of the Adnectin scaffold. Furthermore, we demonstrate that hydrogen/deuterium exchange by hydrogen bonded amides in the C-terminal β-strand of the original scaffold is induced by transient inter-Adnectin association, and that equivalent exchange is not observed in our solubility-enhanced scaffold. Next, we describe the results of variable-temperature solution NMR experiments that probe Adnectin dynamics. Each resonance observable by NMR spectroscopy is composed of contributions from structurally equivalent nuclei in a vast number of proteins, the conformations of which may both differ from each other at any particular instant and evolve over the timescale of the experiment. The temperature dependences of amide proton and nitrogen chemical shifts are due to differences in the conformations sampled and their probabilities of occupation. Empirically, these temperature dependences are well-approximated by fits to a linear model, the slopes of which (known as temperature coefficients) may report on protein dynamics in the vicinity of each backbone amide. We explore possible determinants of amide proton and nitrogen temperature coefficients using a combination of molecular dynamics simulations and quantum chemical (density functional theory) calculations. In the directly detected (high resolution) proton dimension, we also analyze deviations from linearity, which may be attributable to fast exchange between protein conformations with distinct chemical shifts and a temperature-dependent difference in free energy.