Why Do Compulsions Persist? 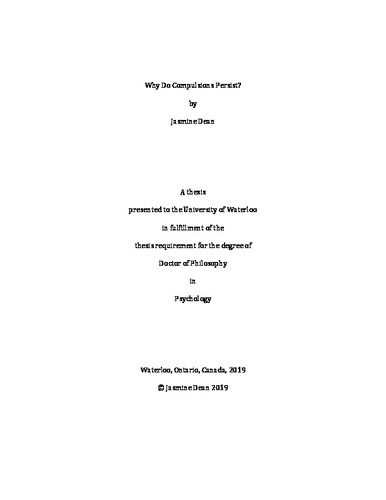 Leading models for understanding compulsive behaviour assert that concerns about the safety or well-being of oneself or others, combined with overestimates of responsibility for protecting oneself and others from harm, evoke anxiety (Rachman, 2002). This anxiety is not resolved until the person is able to feel certain that potential danger has been neutralized via some kind of action (Salkovskis, 1985; Rachman, 2002). However, we do not have a good understanding of why that sense of certainty is often so elusive. The purpose of the present dissertation was to further elucidate the phenomenology of compulsive behaviours and the factors that influence the decision to repeat or prolong them. Study 1 examined the relationship between repeated or prolonged washing behaviours and psychological factors, including memory and sensory confidence, perceived responsibility, and desired certainty across individuals low and high in fears of contamination, who either contaminated their hands or did not, prior to either preparing a gift bag for preschoolers or sorting paper. In all conditions, participants were invited to wash their hands however they would like, for as long as they would like, prior to and during completion of the gift-bag or paper tasks. Video recording was used to capture phenomenology of washing behaviours. Participants were administered several self-report questionnaires throughout the study. Findings from Study 1 made salient both the role of contamination fears and contextual factors in the phenomenology of hand washing behaviours. Those participants high in fears of contamination assumed greater responsibility for potential harm and predicted greater likelihood and severity of potential harm. They washed for significantly longer and included more actions within their wash. However, across all groups, the decision to wash was driven by exposure to a contamination induction and post-wash task. Similarly, across all participants, pre-wash estimates of harm were a significant predictor of wash duration, whereas ratings of responsibility for preventing harm were not. For all groups, exposure to a contamination induction was associated with formation of avoidance-based goals for hand washing (get rid of germs vs. get my hands clean), which were associated with significantly longer wash durations. Those assigned to prepare gift bags desired greater certainty that their hands were washed properly than those in the paper-sorting task. These findings emphasize the importance of examining contextual factors, goals, and termination criteria in addition to presence of contamination fears/OCD symptoms. Study 2 examined washing and checking compulsions within a sample of community members who met criteria for a diagnosis of OCD. Phenomenological and self-report data was gathered via digital diary entries. This study allowed us to gather novel exploratory descriptive data on the phenomenology of compulsive behaviours as they occurred in vivo, including compulsion duration and number of repetitions. Furthermore, this study allowed for testing of a tablet application designed to gather this data and we report on how future studies might utilize and improve upon this method of data collection. Participants reported an obsessive thought, image, or impulse preceding 73% of the compulsions recorded. Therefore, according to participant report, approximately one quarter of compulsive behaviours did not follow the typical OC cycle described within DSM criteria. Self-reported distress associated with obsessive thoughts was associated with severity of OCD symptoms but was not significantly associated with duration of compulsive episodes or the reported number of repetitions within episodes. The goals rated as most important were to achieve a sense of personal satisfaction, to complete the compulsive behaviours properly, and to ensure that others would not hold one responsible for harm. When participants reported a focus on distress reduction as their termination criteria, their compulsive episodes lasted significantly longer than if they reported terminating based on a sense of satisfaction or certainty. Ratings of successful completion were not correlated with episode duration, suggesting that a longer episode did not guarantee a satisfying outcome. Therefore, prolonging or repeating a compulsion may do relatively little to reduce distress or promote satisfaction, further perpetuating the compulsive cycle. As a whole, this program of research suggests that appraisals of responsibility and harm, goals, and termination criteria play an important role in washing and checking behaviours. Although the leading cognitive model of OCD places primary emphasis on obsessions as preceding and instigating compulsive behaviours, a large amount of the variance within compulsive behaviours could be influenced by factors that come into play as a compulsive behaviour is initiated and completed. Thus, focusing on influential psychological and behavioural factors during the completion of compulsions yields information crucial to understanding and treating OCD.