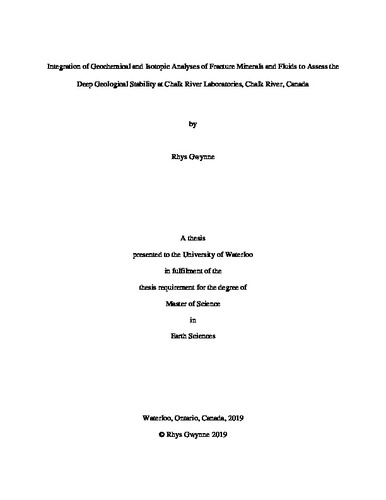 The crystalline bedrock underlying the Chalk River Laboratories (CRL) at Canadian Nuclear Laboratories (CNL) provides a valuable analogue for potential nuclear waste storage sites. As the main pathways for fluid flow in crystalline rock are facilitated by interconnected fracture networks, it is especially important to study and understand the timeline of fracture formation, the subsequent precipitation and stability of fracture sealing minerals, as well as the glacial, tectonic and geological history of the site as it relates to the local and regional hydrological stability. Previous studies were integrated with new data that was primarily focused on the discrete groundwater sampling of a series of boreholes at the CRL site as well as porewater analyses. Utilizing major ion geochemistry as well as stable isotopic analyses, several trends were noted in order to infer the fluid history at the CRL as well as the theoretical influence of the different possible water types on hydrological and fracture mineral stability. The groundwaters of the CRL were found to be a mixture of mostly meteoric recharge with a smaller glacial meltwater component. A more saline endmember was noted in certain locations thought to originate from mixing with a high conductivity fluid at depth (paleoseawater, rock porewaters, etc.). Meteoric and glacial meltwaters after infiltration from the surface follow typical evolution trends due to mineral dissolution and water-rock interaction progressing from Ca-HCO3 to Na-HCO3 to Na-HCO3-Cl type waters as available minerals are dissolved and longer timescale exchange reactions occur. No evidence of the influence of shield brines or recent hydrothermal waters was noted. Despite the geochemical variability documented there were no significant concerns that could be noted when considering their influence on calcite stability at depth. This supports the findings of previous studies that the crystalline bedrock fracture calcites of the CRL have been stable for more than 250 ka.