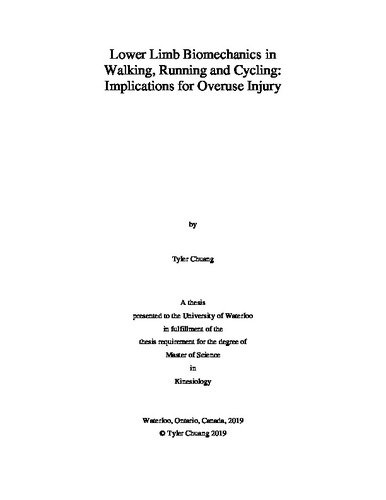 A common anecdotal theory among endurance athletes is that cycling results in fewer knee injuries compared to running. This is thought to be due in part to a lower impact ground reaction force in cycling, compared to running. Thus, as these endurance athletes age, there is a tendency to shift from running participation to cycling participation in order to avoid injury. However, the knee has been reported to be the most commonly injured region in both sports, with similar injury rates (Clarsen, Krosshaug, & Bahr, 2010; James, 1995). While it has been found that cycling does typically result in a lower peak ground reaction force compared to running (Gatti et al., 2017), it is unknown how other mechanisms (which could potentially lead to injuries such as iliotibial band syndrome and patellofemoral pain syndrome) differ between these exercise modalities. There has been an abundance of research conducted assessing the impacts of cycling on subsequent running performance (i.e. triathlon performance), specifically from a physiological point of view (Heiden & Burnett, 2003; Hue, Le Gallais, Chollet, Boussana, & Préfaut, 1998). No study to date, however, has explicitly compared the biomechanics of running and cycling. The purpose of the current study was to compare dynamic joint stiffness, co-contraction of the muscles surrounding the knee, segment coordination variability and iliotibial band impingement measures between walking, running and cycling in young, experienced runner/cyclists, in order to elucidate the risk of developing knee injury in one activity over the other. Fifteen healthy, trained runner/cyclists (11M, 4F, age: 25.1 ± 4.7 years, height: 1.80 ± 0.1 m, mass: 72.1 ± 8.2 kg) were recruited. Muscle activity for 7 lower limb muscles were collected using wireless surface electromyography. External ground reaction forces were collected using force plates for the walking and running trials and an instrumented force pedal for the cycling trials. 3D kinematics were collected using an active motion capture system. Participants performed 6 trials of walking at a self-selected pace, 6 trials of running at a pace equivalent to 70% of their maximal heart rate and 6 minutes of cycling at an intensity of 65% of their maximal heart rate. These intensities were selected to represent a typical, social weekend activity. A walking or running trial consisted of one progression overground on a 20m runway and a cycling trial consisted of 30 second efforts extracted from a continuous, steady state, 6-minute trial on the cycle ergometer. Walking was assumed to be a relatively low injury-risk activity and was performed to act as a baseline to which running and cycling could be compared. Kinematic, kinetic and electromyographical signals were analyzed during the stance phase of walking/running and the downstroke of cycling. These portions of the respective activities were chosen since they are the main propulsion producing phases of their respective activities. Compared to walking and cycling, running generally had a larger dynamic joint stiffness and co-contraction index. For the entire stance/downstroke, and when it was broken into an initial and terminal phase, running had the largest DJS, followed by walking and then cycling (all p<0.0001). For stance/downstroke as well as the terminal phase, for all muscle groupings, running had a greater CCI compared to walking and cycling (all p<0.05/4), which were not different from each other. For the initial phase, for the VLLG and VMMG muscle groupings, running had a greater CCI compared to walking and cycling (both p<0.05/4), which were not different from each other. For the VLBF muscle grouping, running had a greater CCI compared to walking, which was greater than cycling (p=0.002) and for the VMST muscle grouping, walking and running were larger than cycling, but were not different from each other (p=0.002). The coordination variability was not different between walking, running or cycling for the sagittal thigh / sagittal shank or sagittal shank / sagittal foot segment coupling (both p>0.05). In terms of IT band impingement measures, running had a larger ITBEX compared to walking and cycling, which were not different from each other (p=0.0001). In terms of IT band impingement duration over an equivalent cumulative load, there were no differences between walking, running and cycling (p=0.164). The outcome measures that were different from walking (assumed to be a relatively low-injury risk activity) might be a contributor to injury for that activity. Of the outcomes analyzed in the current study, joint stiffness and co-contraction thus could potentially play a role in running injuries. None of the studied outcomes, however, when interpreted in isolation, likely play a role in cycling injuries. At the large knee flexion angles, such as those exhibited during the downstroke of cycling, the patellofemoral contact pressure, area and force have been found to be increased compared to full extension (Lewallen, Riegger, Myers, & Hayes, 1990). Thus, perhaps large flexion angles may be an important factor, either in isolation in combination with the outcome measures analyzed such as the co-contraction indices and coordination variability, to overuse injuries in cycling. This was the first study to explicitly compare the biomechanics of running and cycling in the same study. When comparing walking, running, and cycling, significant differences were found in the dynamic joint stiffness and co-contraction index. Since injury rates between the two sports are very similar, these findings suggest that the same injuries could manifest from different injury mechanisms. Runners may opt to cross train in cycling but should be warned that due to large knee flexion angles under load, there are mechanisms of injury during cycling that may also result in overuse injury.