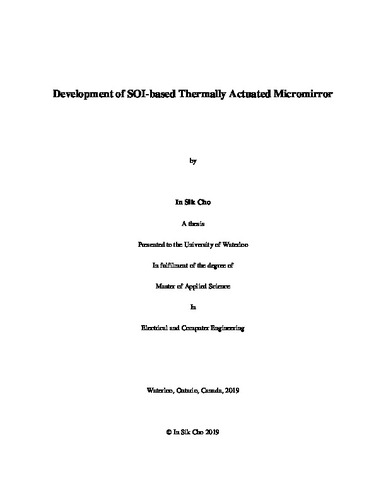 Micromirror is a Micro-Electro-Mechanical Systems (MEMS) device used to steer light by tilting or displacing a reflective surface. It is applied in numerous scanning applications and display technologies such as Light Detection And Ranging (LiDAR) and retinal scanning display. To achieve rotational or translational motion in a compliant direction with applied voltage, microactuators are implemented to a mirror. Among four commonly known principles of MEMS actuation, which are electrostatic, thermal, electromagnetic, and piezoelectric actuations, the proposed micromirror device operates based on thermal actuation, more specifically, using an Al/SiO2 bimorph structure. In this thesis, five different designs are proposed including some configurations capable of producing three degree-of-freedoms; tip, tilt, and piston motion. The proposed device also benefits from using Silicon On Insulator (SOI) wafer as a substrate as the buried oxide layer is used as an etch stop for Deep Reactive Ion Etch (DRIE) process, and the device layer enhances the flatness of the mirror surface. In the final design, mirrors with a diameter of 500 µm consisting of silicon, aluminum, and silicon oxide with actuators made of aluminum and silicon oxide layers are developed, fabricated, and tested. The selection of the dimensions and materials are justified through simulations in response to voltage in various scenarios. Device dimensions are varied to investigate the effect of each parameter as well. In addition, the designs are simulated with other potential materials for the bimorph structure. The fabrication process is optimized to circumvent the curvature of the mirror caused by residual stress. For the final fabrication process, the device Si layer is first patterned and etched for the mirror structure. Then, Al is used as a hard mask for both frontside and backside while the frontside aluminum is also a part of the device. The silicon oxide layer on the frontside, and the handle layer on the backside are etched using Bosch process. In this research, some of the challenges are confronted and resolved during the fabrication, and these include: Al layer deposit and etch, the DRIE process, and residual stress after the release. Finally, Scanning Electron Microscope (SEM) images of the fabricated devices are taken, and the tilt motion of the mirrors in response to actuation voltages is verified under an optical microscope. The tilt angle of the micromirrors are further investigated with a surface profiler. In conclusion, the SOI-based thermally actuated micromirror device is successfully developed with simple fabrication process while producing noticeable tilt motion with a very low actuation voltage.