Speed of Response does not Affect Feelings of Rightness in Reasoning 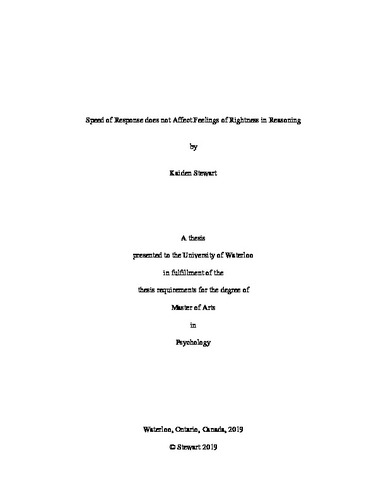 It has been argued (Thompson, Prowse Turner & Pennycook, 2011) that the experience of ease (i.e., the ability to quickly generate an initial response) during processing influences one’s likelihood of engaging reflectively with a problem. Thompson and colleagues argued that the ease with which an answer comes to mind (i.e., answer fluency) is a critical determinant of Feelings of Rightness (FOR), which, in turn, determine one’s likelihood of reflecting. However, the possibility remained that the critical determinant of FORs is the speed of the total response, given the nature of the evidence for this claim. The critical difference between these two accounts is the contribution of factors occurring after the point where an answer comes to mind. Across two Experiments, we manipulated the duration of the physical response in order to identify whether participants’ confidence (FOR) judgments are at least partially based on factors occurring after the initial mental generation of an answer. We found no evidence that FORs nor reflection are influenced by a manipulation of response execution. Broadly, the present investigation provides evidence that the relation between speed of response and FORs is likely due to the speed with which an answer is generated internally. That is, events occurring after the generation of a response, at least as operationalized here, do not influence FORs. This is consistent with Thompson and colleagues’ (2011) suggestion that answer fluency is the critical variable in determining FORs.