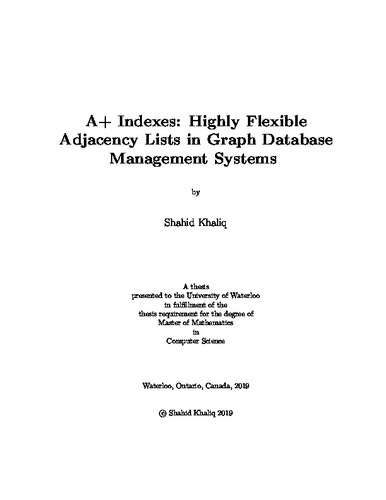 Adjacency lists are the most fundamental storage structure in existing graph database management systems (GDBMSs) to index input graphs. Adjacency lists are universally linked-list like per-vertex structures that allow access to a set of edges that are all adjacent to a vertex. In several systems, adjacency lists can also allow efficient access to subsets of a vertex’s adjacent edges that satisfy a fixed set of predicates, such as those that have the same label, and support a fixed set of ordering criteria, such as sorting by the ID of destination vertices of the edges. This thesis describes a highly-flexible indexing subsystem for GDBMSs, which consists of two components. The primary component called A+ indexes store adjacency lists, which compared to existing adjacency lists, provide flexibility to users in three aspects: (1) in addition to per-vertex adjacency lists, users can define per-edge adjacency lists; (2) users can define adjacency lists for sets of edges that satisfy a wide range of predicates; and (3) provide flexible sorting criteria. Indexes in existing GDBMS, such as adjacency list, B+ tree, or hash indexes, index as elements the vertices or edges in the input graph. The second component of our indexing sub-system is secondary B+ tree and bitmap indexes that index aggregate properties of adjacency lists in A+ indexes. Therefore, our secondary indexes effectively index adjacency lists as elements. We have implemented our indexing sub-system on top of the Graphflow GDBMS. We describe our indexes, the modifications we had to do to Graphflow’s optimizer, and our implementation. We provide extensive experiments demonstrating both the flexibility and efficiency of our indexes on a large suite of queries from several application domains.