Interpreting Jane Austen for a Contemporary Audience: Lost in Austen's Reworking of Pride and Prejudice 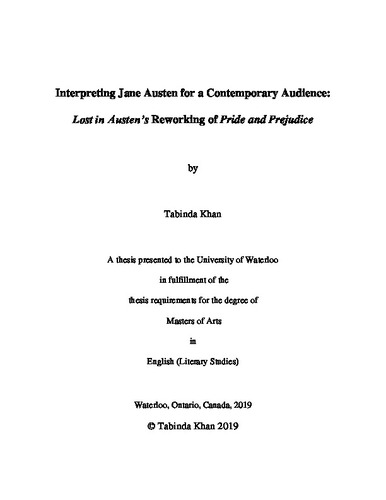 This thesis argues that Lost in Austen, as a fantasy adaptation of Pride and Prejudice, reveals the feminist and empowering elements of Jane Austen's novels. This four-part TV series uses the element of time travel to juxtapose the Georgian Era with the twenty-first century and illuminates the various weaknesses and drawbacks of both time periods. It substitutes Elizabeth Bennet’s character with a contemporary woman named Amanda Price—who imagines Austen’s Pride and Prejudice as a romantic escape from her everyday difficulties, such as her mundane job as a back clerk and her unsatisfying relationship with her unfaithful boyfriend. This thesis illustrates that the marriage plots in Austen’s novels are not merely conventional but directly address the necessity of marriage as women in that era have no other options for earning their incomes and economic survival. Austen provides her heroines sensitive partners which not only give them emotional satisfaction but economic stability. Amanda’s key issue as a contemporary woman is her inability to oppose her boyfriend’s insensitive behavior and confront his past infidelity. As an active participant in Pride and Prejudice, Amanda regains the assertiveness and strength in her personality, as she attempts to keep the novel’s plot on track and save various characters from unfortunate circumstances. Lost in Austen presents a critique of the post-feminist culture where women still experience social and cultural inequalities, while possessing legal and economic freedom. The series also makes an important comment on recent adaptations of Pride and Prejudice that have linked Austen’s novel to the Chick Lit genre since Lost in Austen ultimately reaffirms the power and value of Austen’s depiction of personal growth and female empowerment in her novels.