German as a foreign language: Fostering intercultural and symbolic competence in integration courses in Germany 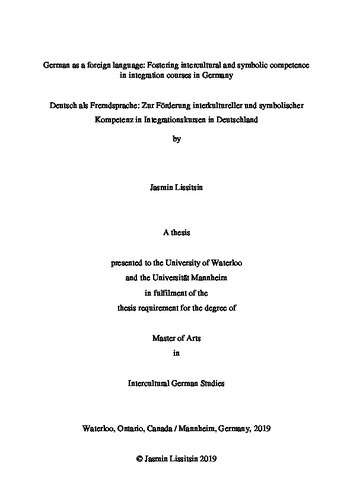 In the globalized 21st century, frequently rising international and intercultural encounters, mass migrations, and growing displacements happen to increase the necessity of intercultural language teaching, especially in integration courses. Drawing on two more and more for the language teaching sector important concepts, the intercultural competence and the symbolic competence, this research examines the existence of cross-cultural reflection in one popular German textbook that is especially used in integration courses. It argues, that Hier! Deutsch für die Integration A1.1 predominantly contains material of traditional language teaching while excluding innovative pedagogical and didactic approaches in the field of German as a second/foreign language. Additionally, it uncovers the prevalent construction of language learners in the textbook that is tied to the native speaker ideology and the monolingual bias. The theoretical framework is grounded on a critical discourse analysis of a structuralist and constructivist view of the concept of culture as well as guidelines second-language pedagogy derived from these two different perspectives. Built on these theoretical thoughts, two sets of criteria were developed to search for both, intercultural, and symbolic components within the chosen textbook. The outcomes of the analysis show that especially the intercultural competence was taken into account during the material designing process, while the integration of symbolic competence could not be found for the greatest extent. The discussion offers some line of thoughts for future research inquiry that would promote both competences as well as critical language awareness in German integration courses.