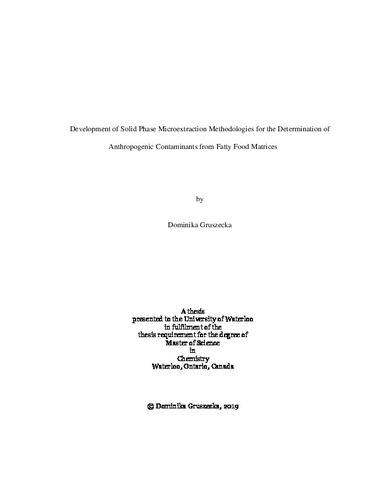 Anthropogenic contaminants have been on the rise worldwide due to global industrialization. The world is now faced with the consequences of the pollution caused by the exposure of man-made chemicals in the environment. Testing of foodstuff for these pollutants has become extremely important as various fields of science continuously demonstrate the dangers posed by such contaminants to environmental, and, ultimately human health. Pesticides and machining oils contaminating soil and river water are of particular note as their use is widespread and they have a tendency to bioaccumulate in adipose tissue. Moreover, bioaccumulated compounds may be further biomagnified up the food chain until they are consumed by humans. Currently, methods for screening bioaccumulants in fatty foods are time-consuming and resource-intensive resulting in significant environmental waste. Hence, this thesis presents the development of eco-friendly methods to test for pesticides and polychlorinated n-alkanes (PCAs) using solid phase microextraction (SPME) techniques in fatty food matrices. The determination of pesticides was performed from soymilk samples using matrix-compatible polydimethylsiloxane (PDMS) overcoated divinylbenzene/PDMS (DVB/PDMS) SPME fibers on GC-MS instrumentation. Targets for a broad-spectrum representation of commonly used pesticides included trifuralin, dimethoate, diazinon, malathion, chlorpyrifos, thiabendazole, phosalone, λ-cyhalothrin, α-β-cyfluthrin, and esfenvalerate. The method exhibited good figures of merit indicated by low limits of detection at 1ppb for all but trifuralin at 2.5ppb, well below maximum residue levels set by both the Canadian and United States government agencies raging from 0.01 to 8 ppm. The linear range for each compound spanned from the limits of detection up to 1000ppb. Validation of the method was accomplished according to the FDA guidelines; precision and accuracy from back-calculated results reached targets within 70 – 130% of known values with less than 20% RSD. In two other milk brands sampled, Chlorpyrifos and Malathion were each found below MRL for both Canada and the USA, however Dimethoate was found at 742 and 745 ppb in each respectively. PCAs are another example of potent environmental bioaccumulants. Many industrial oils find their way into natural waterways and bioaccumulate in fatty tissues such as fish livers which are harvested to produce oil supplements used for their omega-3 and omega-6 fatty acid content. Screening PCAs from cod liver oil difficult due to the hydrophobic properties of the matrix; a hydrophilic lipophilic balance particle (HLB/PDMS) coated aluminum thin film solid phase microextraction (TF-SPME) blade was used for the extraction. Eight PCA standards ranging from chlorodecane to 1,1,1,3,14,15 - hexachloropentadecane were used as proxies for this work encompassing short and medium chain PCAs with varying degrees of chlorination. Previously unreported Kovats retention indices for two PCAs: 1,1,1,3 – tetrachlorodecane and 1,2,9,10 – tetrachlorodecane were found to be 1649 and 1786, respectively. Calibration of the method was performed with a linear range of 0.075 to 0.75ppm on a conventional GC-MS with electron impact ionization and a single quadrupole. Method limits of quantitation (MLOQ) were determined by multiplying the standard deviation of the lowest calibration point by 10, then dividing by the slope; the MLOQ ranged from 0.217 to 0.07ppm. Standard addition was performed in a second oil to validate method recovery; quantities of PCAs in the second oil were below MLOQ for each compound found. Spiked samples of the second oil had good inter-matrix accuracy for many analytes as the slopes of the two curves were comparable. Four compounds were found at concentrations above MLOQ in other oil brands sampled, the highest at 1.228ppm. The method fits the testing range quoted by the Stockholm Convention on POP, ranging between 0.7-5.5 ppm. Overall this thesis presents two inexpensive methods with reusable materials for sampling persistent organic pollutants in fatty food matrices and can serve as a benchmark for modification for future use in other foodstuffs.