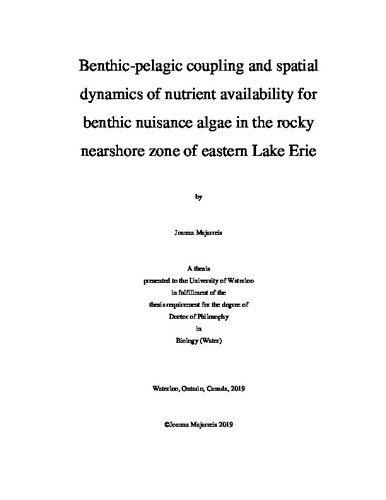 Nuisance Cladophora growth in the nearshore during the summer growing season tends to imply nutrient, particularly phosphorus (P), enrichment in the benthos, especially where there is adequate light and hard substrate that would otherwise limit growth. Tributaries and dreissenid mussels are currently proposed as the main drivers of P to the nearshore fueling nuisance Cladophora growth, although other non-point sources may be important. How nutrients and Chl a are distributed in the nearshore may be a result of time of year in the growing season, proximity to the land-lake margin, proximity to the mouth of tributaries, and physical processes that might serve to enhance or reduce bottom mixing that provides seston to dreissenid mussels. Their relative effects may be modified by water motion, including prevailing currents, bottom turbulence, and boundary effects. Nutrients and chlorophyll a (chla) bulk water samples were collected from the surface and near-bottom at stations using a 10L horizontal Van Dorn sampler in the northern nearshore of the East Basin of Lake Erie from during the Cladophora growing season (May-October) in 2013-2014, and in May 2015. The nearshore was divided into shallow (<10m deep) and deep (≥10m deep), in to make it relevant to nuisance Cladophora growth, which tends to grow to its highest biomass <10m. The full water column was profiled with YSI and FluroProbe sondes for specific conductivity, temperature, and chla. The bottom of the water column was profiled for horizontal water velocity using a down-looking ADCP, and temperature was measured using RBR temperature probes. This thesis specifically investigated horizontal and vertical patterns of nutrients and chla, and their potential sources. This thesis also estimated turbulent diffusive flux of Chl a down and SRP up from the lake bed, and compared these diffusive estimates to mussel-mediated assimilation flux estimates of chla, and with mussel excretion flux estimates of SRP. The results in Chapter 2 suggested that nearshore SRP was above the threshold that Cladophora would be P limited (i.e. ≥2μg/L) in the nearshore. Nutrient and Chl a concentrations tended to be highest at stations closest to Grand River, and tended to be slightly higher in the early part of the season than the late part. Cladophora biomass tended to be highest at shallow stations located farther away from the mouth of the river. Cladophora may have grown to higher biomass at distal shallow stations because of enhanced light clarity in those regions, relative to the relatively turbid water from the river plume. Shallow stations tended to have higher values of nutrients and Chl a than deeper stations, but there were some exceptions, and this may be a reflection of non-point sources impacting the shallow nearshore more so than the deep nearshore. Sampling depth was not significant in explaining nutrient variation in the nearshore; that is surface and bottom samples tended not to be significantly different. Syringe and tower filtration yielded different SRP concentration distributions, and the absolute differences ranged from very close to very large and reflected different temporal patters. Keeping in mind these important differences, syringe and tower filtration results on the whole exhibited similar direction and magnitude. Care must be taken when selecting a sampling method, especially if precise measurements are desired. However, if SRP trends are the goal, these two methods could be useful in showing patterns of SRP. Chapter 3 found that stratification was actually common in the nearshore, and day-long profiling of the water column showed that onset of stratification is dynamic, at least at a 10m station. Stratification did not co-vary with strong patterns of coarse vertical water column heterogeneity, and the water column can appear to be relatively homogenous below the thermocline, at least in measures of specific conductivity and temperature. The relationship between grazing (TG) and mixing (TD) timescales, the estimated time in days for mussels to draw down near-bottom Chl a resulting in a gradient of depletion or the time in days for mixing to abolish near-bottom gradients, predicted that there should be many instances of Chl a depletion, but there were far fewer observations of this. Where near-bottom depletion gradients could be found, there was evidence of a relatively strong mussel influence on near-bottom Chl a depletion. Mussel biomass was positively correlated with the grazing time and with assimilation flux (areal feeding rate per square meter). Estimated assimilation flux was approximately an order of magnitude greater than estimated diffusive flux (the product of the gradient of near-bottom Chl a and diffusivity) at stations where significant near-bottom Chl a depletion was observed. Chapter 4 demonstrated that mean diffusivity sampled under calm conditions in the nearshore at different station depths and times of the season is constrained to within a relatively consistent range. Estimated particulate phosphorus (PP) areal flux was greater than SRP areal flux, which in turn was greater than Cladophora areal uptake rates. There was a spatial disconnect between where the greatest biomass of Cladophora occurred and where the greatest biomass of mussels occurred. At some of the shallowest stations, estimated mussel diffusive SRP flux was not sufficient to support Cladophora growth locally. However, deeper stations do not have Cladophora due to light limitation, and there is SRP flux from the benthos in that area. Over the total nearshore area, mussels appear to produce enough SRP to support Cladophora biomass. PP flux was greater than SRP flux, and the fate of the remainder of the PP that is not converted to mussel tissue or excretia is still an unknown variable in benthic P-cycling. Diffusive SRP flux estimates were within the same range as previously reported literature values and with estimates of assimilation flux that were ultimately estimated from Chl a profiles. This lends support to the idea of using Chl a profiles, which tend to be part of routine water quality monitoring cruises, to estimate of both Chl a fluxes into mussel beds and SRP fluxes out of them. Using Chl a profiles may be a less labour-intensive way to collect data with nearly the same accuracy as other more time-consuming methods to determine near-bottom fluxes.