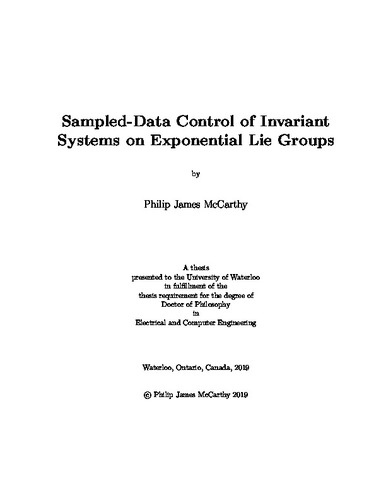 This thesis examines the dynamics and control of a class of systems furnished by kinematic systems on exponential matrix Lie groups, when the plant evolves in continuous-time, but whose controller is implemented in discrete-time. This setup is called sampled-data and is ubiquitous in applied control. The class of Lie groups under consideration is motivated by our previous work concerning a similar class of kinematic systems on commutative Lie groups, whose local dynamics were found to be linear, which greatly facilitated control design. This raised the natural question of what class of systems on Lie groups, or class of Lie groups, would admit global characterizations of stability based on the linear part of their local dynamics. As we show in this thesis, the answer is---or at least includes---left- or right-invariant systems on exponential Lie groups, which are necessarily solvable, nilpotent, or commutative. We examine the stability of a class of difference equations that arises by sampling a right- or left-invariant flow on a matrix Lie group. The map defining such a difference equation has three key properties that facilitate our analysis: 1) its Lie series expansion enjoys a type of strong convergence; 2) the origin is an equilibrium; 3) the algebraic ideals enumerated in the lower central series of the Lie algebra are dynamically invariant. We show that certain global stability properties are implied by stability of the Jacobian linearization of dynamics at the origin, in particular, global asymptotic stability. If the Lie algebra is nilpotent, then the origin enjoys semiglobal exponential stability. We then study the synchronization of networks of identical continuous-time kinematic agents on a matrix Lie group, controlled by discrete-time controllers with constant sampling periods and directed, weighted communication graphs with a globally reachable node. We present a smooth, distributed, nonlinear discrete-time control law that achieves global synchronization on exponential matrix Lie groups, which include simply connected nilpotent Lie groups as a special case. Synchronization is generally asymptotic, but if the Lie group is nilpotent, then synchronization is achieved at an exponential rate. We first linearize the synchronization error dynamics at the identity, and show that the proposed controller achieves local exponential synchronization on any Lie group. Building on the local analysis, we show that, if the Lie group is exponential, then synchronization is global. We provide conditions for deadbeat convergence when the communication graph is unweighted and complete. Lastly, we examine a regulator problem for a class of fully actuated continuous-time kinematic systems on Lie groups, using a discrete-time controller with constant sampling period. We present a smooth discrete-time control law that achieves global regulation on simply connected nilpotent Lie groups. We first solve the problem when both the plant state and exosystem state are available for feedback. We then present a control law for the case where the plant state and a so-called plant output are available for feedback. The class of plant outputs considered includes, for example, the quantity to be regulated. This class of output allows us to use the classical Luenberger observer to estimate the exosystem states. In the full-information case, the regulation quantity on the Lie algebra is shown to decay exponentially to zero, which implies that it tends asymptotically to the identity on the Lie group.