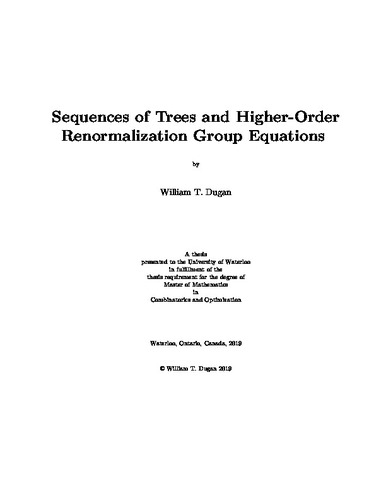 In 1998, Connes and Kreimer introduced a combinatorial Hopf algebra HCK on the vector space of forests of rooted trees that precisely explains the phenomenon of renormalization in quantum field theory. This Hopf algebra has been of great interest since its inception, as it connects the disciplines of algebra, combinatorics, and physics, providing interesting questions in each. In this thesis we introduce the notion of higher-order renormalization group equations, which generalize the usual renormalization group equation of quantum field theory, and further define a corresponding notion of order on certain sequences of trees constituting elements of the completion of HCK. We also give an explication of a result, due to Foissy, that characterizes which sequences of linear combinations of trees with one generator in each degree generate Hopf subalgebras of HCK. We conclude with some results towards classifying these sequences by their order (when such an order is admitted), and discuss the place of the Connes-Moscovici Hopf subalgebra in the context of this new framework.