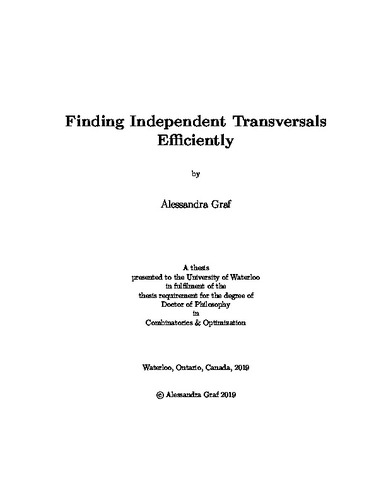 Let G be a graph and (V_1,...,V_m) be a vertex partition of G. An independent transversal (IT) of G with respect to (V_1,...,V_m) is an independent set {v_1,...,v_m} in G such that v_i is in V_i for each i in {1,...,m}. There exist various theorems that give sufficient conditions for the existence of ITs. These theorems have been used to solve problems in graph theory (e.g. list colouring, strong colouring, delay edge colouring, circular colouring, various graph partitioning and special independent set problems), hypergraphs (e.g. hypergraph matching), group theory (e.g. generators in linear groups), and theoretical computer science (e.g. job scheduling and other resource allocation problems). However, the proofs of the existence theorems that give the best possible bounds do not provide efficient algorithms for finding an IT. In this thesis, we give poly-time algorithms for finding an IT under certain conditions and some applications, while weakening the original theorems only slightly. We also give e fficient poly-time algorithms for finding partial ITs and ITs of large weight in vertex-weighted graphs, as well as an application of these weighted results.