Interpreting statements from others: The role of temperament, teasing experience, and social dominance 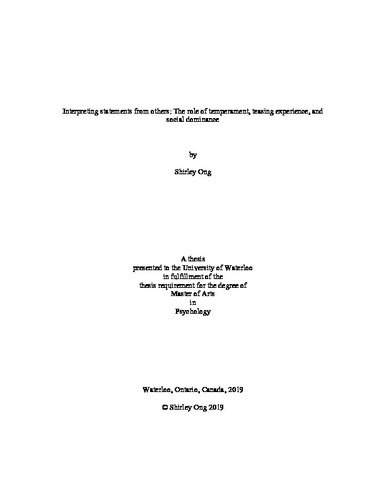 The ambiguity of our language system requires that listeners go beyond the words uttered, integrate contextual information, and recognize speaker cues in order to fully appreciate the intended meaning in messages. Counterfactual verbal irony makes this point salient as the intended meaning is in opposition with the literal words. While past work has examined how contextual factors influence irony comprehension, less is known about how speaker and listener characteristics impact interpretation. Addressing a gap in the literature, this work examined how the social status of the speaker and individual characteristics of listeners (i.e., shyness, history of teasing experiences, perceived social dominance) impacted listeners’ interpretation of literal and ironic statements. An undergraduate sample of participants (N = 90) completed a series of “I Spy” games and were told that various players (described as either high or low in social dominance) were watching their performance. These (virtual) players provided the participants with feedback on their performance, delivered as either a literal/ironic compliment or criticism. Following each game, participants answered questions about the speaker’s belief (assessing comprehension) as well as their impressions of the speaker’s attitude, humour, popularity, and desirability as a future social partner. Within this first-person task, the pattern of comprehension was consistent with the existing literature (using third-person tasks) in that ironic statements were more difficult to comprehend than literal ones, especially ironic compliments. The speakers’ social dominance was not found to affect how participants interpreted literal or ironic statements. Listeners’ self-reported shyness, teasing experience, and perceived social dominance did not influence how speaker beliefs/attitudes were interpreted. However, these characteristics were associated with perceptions of speaker popularity, such that individuals who are shy, have a history of teasing, or low perceived dominance, tend to view speakers who use critical language as being more popular. Further, those individuals with a history of teasing or high perceived dominance perceived ironic language as more humorous. Although tentative, these findings contribute to a growing literature as to how listener characteristics influence how speakers’ intentions are perceived.