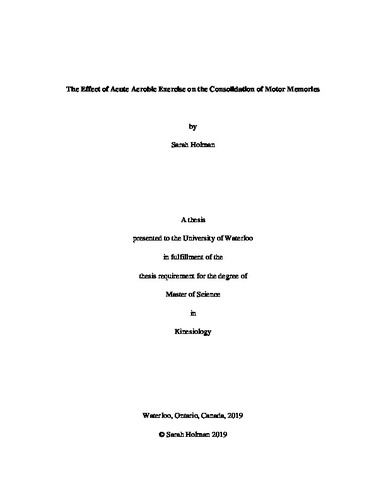 Previous research has shown that acute aerobic exercise performed prior to motor training can assist with motor skill acquisition through enhancement of motor cortical plasticity. Recently, studies using high intensity interval training performed post-motor training have found improvements in the retention of the motor skill. This suggests that exercise performed post-motor training may enhance motor memory consolidation, although the mechanisms of this are unclear. We hypothesized that acute continuous moderate intensity exercise performed post-motor training would also assist with motor skill retention and that this behavioural change would be positively correlated with neural markers of cortical plasticity. Thirty-three participants were randomly assigned to one of two groups: exercise (EXE) or control (CON). During the first visit, participants completed a motor training session of a bimanual wrist flexion task using wrist movements to control the cursor position on a computer screen to reach a target. Movement to the target was cued, allowing for the generation of a cortical movement-related potential (MRP). MRP modulations represent changes in the excitability of the brain prior to movement which are associated with task performance. After motor training, EXE performed a session of continuous moderate intensity exercise on a recumbent bike for 20 minutes (70% of heart rate reserve (HRR)). CON read for the same amount of time. Both groups completed two post-training tests after the exercise or rest: one 10 minutes after the exercise/rest session (post-training test 1), and one once heart rate returned to resting level in EXE (post-training test 2) or 30 minutes after rest in CON. Participants returned to the lab 1 day and 7 days later to complete retention and transfer tests of the task. MRPs were measured using electroencephalography (EEG) to investigate neural markers related to motor performance and exercise during the first visit. To assess behavioural changes measures of speed and accuracy were collected at all timepoints as response time (RT) and root mean square (RMS) of the difference in the actual from the ideal trajectory of the cursor. Results show that EXE had a smaller change in accuracy scores compared to CON at both retention timepoints, however this group difference was only significant at the 7 day retention. There were no significant differences in speed between the groups at the retention tests and no significant differences in accuracy or speed between the groups at the transfer tests. Consistent with previous motor training studies our MRP data shows an increase in amplitude from early to late training, however this was only significant at CZ and not FCZ. MRP amplitude was not significantly increased after exercise at the post-training test 2. Correlational analysis revealed a significant correlation between the change in the MRP amplitude sum from early to late training and the change in RT from the last 5 trials of post-training 2 to retention 1. This was only observed in EXE and when both groups were pooled together. Our results suggest that post-motor training exercise helps to retain the accuracy of the skill after motor training. Additionally, there may be a relationship between excitability increases during training and performance of the skill at retention which may be enhanced with post-motor training exercise. These results inform motor learning paradigms and future studies with other populations including older adults and neurorehabilitation patients.

Sarah Holman (2019). The Effect of Acute Aerobic Exercise on the Consolidation of Motor Memories. UWSpace. http://hdl.handle.net/10012/14928