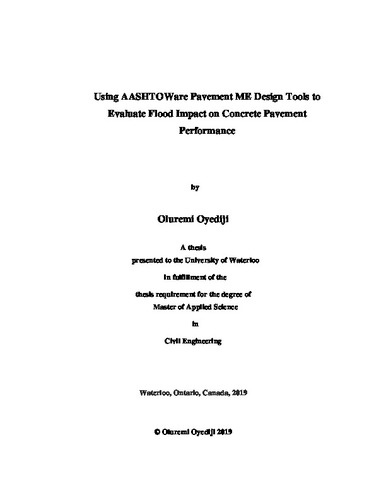 The resilience of concrete pavement to flood impact has remained positive based on previous experimental investigations and overtime recommended as a pre-flood adaptation strategy in countries such as Australia and the United States. However, no study on concrete pavement flood impact performance has been conducted in Canada until now. Flood impact assessment under Canadian climate conditions was therefore conducted on typical concrete pavement designs common to the provinces of Ontario and Manitoba. In the Ontario study, representative arterial and collector pavement designs were modelled, and cycles of flood hazards simulated on these pavements to evaluate changes in performance under climate change scenarios using the AASHTO Pavement ME Design (PMED) program. Percentage damage was estimated by observing changes in International Roughness Index (IRI) prediction values under flood and no-flood conditions. Results indicate a slight reduction in pavement performance across road classes, and minimal increases in damage as event cycles increased. Estimated flood damage on pavement performance was more pronounced in collector (non-dowelled) pavements than arterial (dowelled) pavements. The major distress indicator which contributed to damage was faulting, being that it increased across event cycles irrespective of return periods. In the Manitoba case study, a total of 27 pavement design classes was developed based on a matrix of representative traffic levels, subgrade conditions and slab thicknesses common to the province. Projected climate-induced flood hazards under climate change scenarios were further modelled on the design classes to evaluate flood impact on concrete pavement performance. Results also indicated diminutive flood damage and loss of life in all of the concrete pavement classes. Increases in flood cycles induced no further damage or loss in pavement performance. In all of the pavement classes considered, there was no positive change or damage to faulting and fatigue cracking under flood conditions. The IRI parameter was the only parameter influenced by inundation, which could further suggest the possible build-up of permanent moisture-induced warping. The observed low flood damage ratios further reiterates the resilience and adaptive capacity of the Jointed Plain Concrete Pavement (JPCP) to withstand extreme precipitation or flood conditions. A local calibration of the AASHTOWare Pavement ME Transverse Cracking Transfer Function was successfully completed to fit observed concrete pavement performance in Ontario. As bias existed in cracking predictions using default AASHTOWare Pavement ME cracking calibration coefficients, a need for local calibration was pertinent to provide better predictions of cracking performance under Ontario conditions. This achievement is pivotal to the delivery of reliable and economical pavement design and construction projects across the province. The derived local calibration factors have been accepted and published by the Ministry of Transportation Ontario (MTO) for industry use.