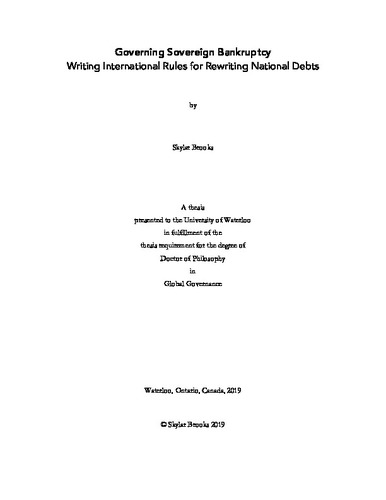 This thesis examines three sets of recent initiatives aimed at reforming the international regime for sovereign debt restructuring. The first involved changes to the rules governing IMF lending and their role in triggering debt restructurings. The second entailed reforms to sovereign bond contracts in order to facilitate smoother restructuring processes. The third took place within the UN, where states advanced the idea of an international hard-law approach to debt restructuring but settled for a set of soft-law principles. Taken together, these initiatives had a mixed impact on the regime. Contract reforms strengthened bond restructuring processes; IMF reforms weakened the mechanism designed to trigger necessary restructurings; and UN reform efforts had little concrete impact in either direction. What explains the variation in these recent regulatory outcomes? I argue that this variation can be understood according to two dimensions: the process-trigger distinction and the legal-institutional design of process-oriented mechanisms. A trigger mechanism is hard to institutionalize because of the time-inconsistent preferences of powerful states and their more general desire—supported by sovereign debtors and private creditors and amplified by recent experiences—for case-by-case decision-making when it comes to if and when to trigger a debt restructuring. Compared to the trigger, some but not all process mechanisms have greater odds of success, depending on their design. Hard-law designs face huge political opposition, whereas soft-law tools can encounter political challenges but are also of limited effectiveness in this issue area. By contrast, private-law contracts provide useful mechanisms for navigating the trade-offs of regulating debt restructuring processes, especially for dominant states. I also argue that historical legacies and processes have influenced recent reform outcomes, but mainly through their ability to further enhance or diminish the prospects of mechanisms whose political utility had already been determined by the process-trigger distinction and/or their legal-institutional design. This thesis makes an empirical contribution to IPE and global governance literatures by providing the first comprehensive analysis of recent sovereign debt restructuring reforms. It makes important theoretical contributions to these literatures by developing an analytical framework for understanding the politics of regulatory reform within the sovereign debt restructuring regime. It also offers insights that contribute to wider debates about institutional design and development, including those related to the choice of international hard-law or soft-law governance instruments, the use of contracts in global governance, and the role of historical legacies and processes in shaping regulatory outcomes.