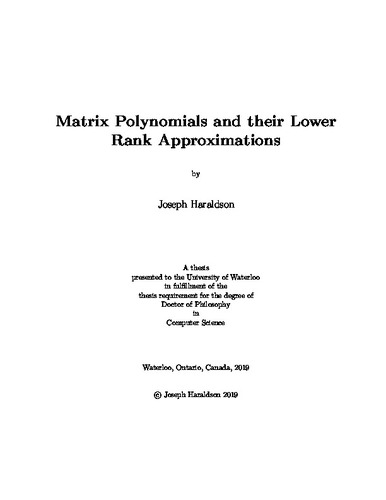 This thesis is a wide ranging work on computing a “lower-rank” approximation of a matrix polynomial using second-order non-linear optimization techniques. Two notions of rank are investigated. The first is the rank as the number of linearly independent rows or columns, which is the classical definition. The other notion considered is the lowest rank of a matrix polynomial when evaluated at a complex number, or the McCoy rank. Together, these two notions of rank allow one to compute a nearby matrix polynomial where the structure of both the left and right kernels is prescribed, along with the structure of both the infinite and finite eigenvalues. The computational theory of the calculus of matrix polynomial valued functions is developed and used in optimization algorithms based on second-order approximations. Special functions studied with a detailed error analysis are the determinant and adjoint of matrix polynomials. The unstructured and structured variants of matrix polynomials are studied in a very general setting in the context of an equality constrained optimization problem. The most general instances of these optimization problems are NP hard to approximate solutions to in a global setting. In most instances we are able to prove that solutions to our optimization problems exist (possibly at infinity) and discuss techniques in conjunction with an implementation to compute local minimizers to the problem. Most of the analysis of these problems is local and done through the Karush-Kuhn-Tucker optimality conditions for constrained optimization problems. We show that most formulations of the problems studied satisfy regularity conditions and admit Lagrange multipliers. Furthermore, we show that under some formulations that the second-order sufficient condition holds for instances of interest of the optimization problems in question. When Lagrange multipliers do not exist, we discuss why, and if it is reasonable to do so, how to regularize the problem. In several instances closed form expressions for the derivatives of matrix polynomial valued functions are derived to assist in analysis of the optimality conditions around a solution. From this analysis it is shown that variants of Newton’s method will have a local rate of convergence that is quadratic with a suitable initial guess for many problems. The implementations are demonstrated on some examples from the literature and several examples are cross-validated with different optimization formulations of the same mathematical problem. We conclude with a special application of the theory developed in this thesis is computing a nearby pair of differential polynomials with a non-trivial greatest common divisor, a non-commutative symbolic-numeric computation problem. We formulate this problem as finding a nearby structured matrix polynomial that is rank deficient in the classical sense.