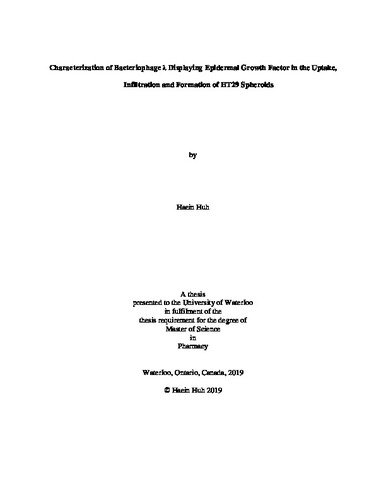 Solid tumours are characterized by a complex structure comprised of extracellular matrix, neoplastic cells and stromal cells, each presenting a barrier to conventional anticancer chemotherapy as well as carrier-mediated drug delivery. Poor penetration of therapeutics into the interstitial tumour microenvironment remains a challenge, with drugs accumulating primarily in the regions of tumours that are situated closer to blood vessels. Bacteriophages do not infect eukaryotic cells, yet they have been shown to penetrate mucosal barriers, including multiple layers of epithelial cells and endothelium. In this work, we used NIH3T3 fibroblast and HT29 colon adenocarcinoma multicellular spheroids to represent the stroma and parenchyma of solid tumours and then to examine infiltration of bacteriophages as a means of delivering therapeutic cargo. By using phage display technology to decorate the surface of λ bacteriophage with epidermal growth factor (EGF), we compared the cell-phage interactions between wildtype phages and EGF-displaying phages, including the assessment of phages’ capacity to traverse the tumour interstitium, to be subjected to cell internalization and their effects on spheroid growth. Both wildtype and EGF-displaying λ phages were observed to adhere to the HT29 and NIH3T3 spheroids and to internalize into cells as early as 30 min following administration. EGF-phage treatment also slowed HT29 spheroid growth – demonstrating a delay in initial aggregation and formation of loosely-organized structures that led to much smaller spheroid formation in the latter stages of growth. These results support the potential for the therapeutic employment of bacteriophages as nanocarriers for targeted delivery.