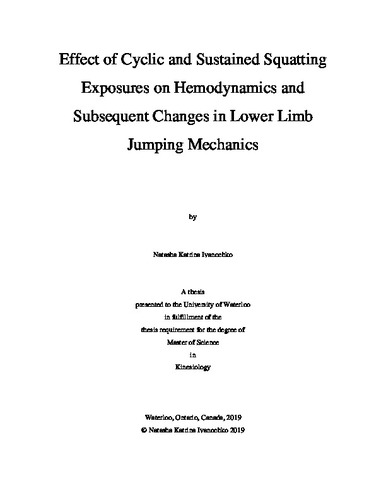 Occupational exposure to high knee flexion postures such as squatting or kneeling is associated with an increased risk of developing knee osteoarthritis. The exact mechanisms behind the increased risk are currently unknown. The literature is inconclusive on whether the duration spent in knee bending postures or the act of cycling through these postures is more detrimental to the knee. The goal of the study was to investigate whether the type of squat (cyclic or sustained) leads to different changes in power, neuromuscular control and lower-limb muscular blood flow parameters. It was hypothesized that sustained squatting would cause more detrimental effects to biomechanical and hemodynamic measures that are related to injury than cyclic squatting. Knee joint power, knee extensor muscle activation patterns, and lower limb kinematics were recorded before and after exposures to cyclic and sustained squats, whereas vastus medialis muscle oxygenation was measured during squat exposures. Thirty healthy young participants (15 Male/15 Female, age: 22.3 ± 2.2 years, height: 1.70 ± 0.09 m, weight: 66.88 ± 11.16 kg) were recruited for the study. Participants completed a cyclic and sustained squatting exposure. The total time spent in a squat posture was equivalent between exposures. The cyclic squat consisted of a 40-second squat followed by 20 seconds of rest, repeated for six cycles. The sustained squat was a static squat hold of four minutes. Two countermovement jumps were performed pre and post each squatting exposure, for a total of eight countermovement jumps. Between squat exposures, a four minute standing recovery occurred. Vastus medialis muscle oxygenation was measured using near-infrared spectroscopy. Lower limb kinematics were collected using 3D-motion capture, kinetics were measured using two embedded force plates, and vastus medialis and vastus lateralis muscle activity was collected with surface electromyography. The sustained squatting exposure was found to cause a significantly greater decrease to peak knee power from baseline compared to the cyclic squat (−0.71 W/kg and −0.33 W/kg respectively, p = .016). A sex difference was also found, with males experiencing greater decreases in knee power than females (−0.73 W/kg vs. −0.32 W/kg, p = .013). A significant interaction occurred for integrated EMG (iEMG) between muscle and phase (p = .037). During the deceleration phase on average iEMG values decreased from baseline values, and increased during the preparatory phase (− 2.48 mV∙s vs. 0.62 mV∙s), with vastus medialis activity being reduced by a larger degree than vastus lateralis. Changes to tissue saturation index % during the squat exposure also displayed a sex main effect (p = .012), with on average males experiencing decreases and females increases (−1.97% vs. 2.60%). Regardless of squat type, the squatting exposure did not cause significant changes to frontal plane motion, delays in muscle onset or changes in percent normalized muscle oxygenation. Historically, occupational squatting and its relationship to knee osteoarthritis has been studied from an epidemiological framework, therefore, the current study was novel in that it provided a more systematic and quantitative assessment of squatting exposures. The study demonstrated that acute exposures to high knee flexion postures cause detrimental changes to power generation, neuromuscular control and hemodynamics. The results suggested that sustained exposures were more detrimental than cyclic exposures. Sex effects indicated that males were more affected by the squatting exposures than females. Our work highlights the importance for workplace guidelines in occupations with frequent squatting to limit the duration of static high knee flexion activities, and provide ample rest between exposures.