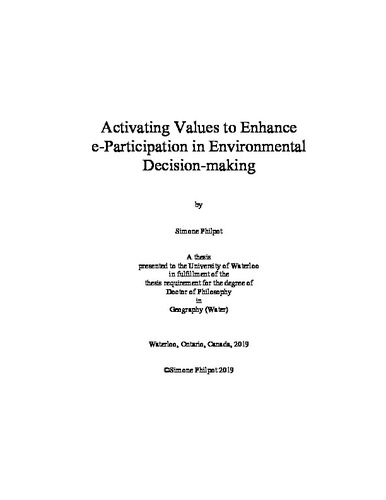 A participatory modeling approach is designed to connect citizens and decision-makers during the selection of the most appropriate alternative solution to an environmental project based on user values systems. First, a novel approach to supporting values-based decision-making is proposed in which values activation is prompted using visual feedback and interactive modules in a software program. Next, the design parameters for a prototype software program called P2P-DSS are presented. P2P-DSS is designed in the style of an online survey, with the added capacity to activate values and provide a shared online space connecting individuals with a survey builder. In this thesis, P2P-DSS is proposed, designed, and then applied to a real-world example in environmental project evaluation. A formal decision-maker with a professional role in the evaluation of an aggregate mining application used P2P-DSS to build a model of the decision from their own perspective. Fifteen volunteers then used P2P-DSS to learn about the issue, provide their individual input in the form of ranked preferences for potential outcomes, and examine the role that values play in their own assessment of the project and the perspective of the model builder. P2P-DSS records every interaction with the software program and participants completed a post-task survey to assess aspects of the system’s performance from their perspective. By analyzing both revealed and stated preferences from the formal decision-maker and public participants, the capacity for the P2P-DSS technique to translate some of the known benefits of values-based thinking into a participatory online platform is indicated. This thesis then addresses the challenge of translating data collected from individuals into collective preference rankings that are useful for decision-makers. With reference to the aggregate mining example, participant input is aggregated using a Modified Borda Count technique. Thus, while values activation is facilitated in this study on an individual basis, the resulting input can be analyzed as group utilities, the possible implications of this information are examined in depth. Finally, a novel data set emerges from this research with implications for decision-making, communications, and conflict management. That is, a model builder calibrates a model by connecting specific values with option choices. Participants can then register a ‘values protest’ by using interactive software tools in P2P-DSS to challenge the values connections calibrated by the model builder. Values protests have implications for the preferences input by the participant and are stored by P2P-DSS as a data point. Next, analysis is conducted to isolate potential points of conflict based on emergent patterns in those protests. This new dataset reveals aspects of the decision context for which different groups do not have a shared understanding of how their decision-making is driven by their underlying values. Gaining insight into the roots of values-based conflicts can be useful for conflict prediction and management, strategic decision-making, and the fine tuning of communications by stakeholder groups. This dissertation examines the boundaries and opportunities for values-based participatory modeling. Specifically, through the design and testing of P2P-DSS this work operationalizes the theory of values activation, thereby expanding the reach of values-based decision-making in online settings. Moreover, by testing protocols to aggregate values-based preferences collected at the individual level into group utility rankings, the P2P-DSS approach is prepared to make contributions for group decision-making. Finally, a new type of data, values protests, is generated and discussed, demonstrating how it can be harnessed to understand and contribute to the management of values conflicts in issues of public interest. Finally, while presenting a novel approach to environmental research, this work also demonstrates that some of the perceived limitations of values research, that are discussed in this thesis, deserve reassessment, as the interactive capacity of software programs opens new avenues to expand the reach of values-based decision-making.