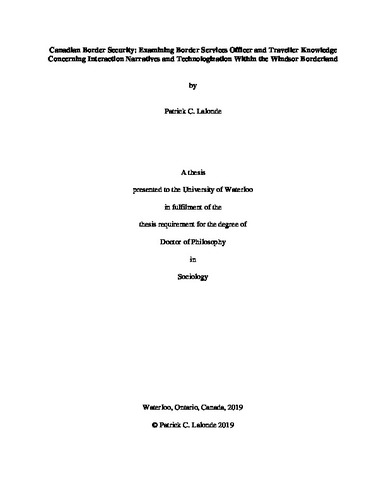 Through contrasting institutional discourses with frontline official and non-official knowledge gleaned from interaction narratives from past social interactions and supplied by border services officers (BSOs) and members of travelling publics circulating at ports of entry in the Windsor, Ontario, Canada borderland, this thesis accomplishes the work of considering border security and mobility governance as an everyday practice (Côté-Boucher, Infantino, and Salter 2014). While previous literature has expertly documented the governmentality of modern borders, its privileging of institutional forms of knowledge means findings are inherently limited in that they ignore subjugated forms of knowledge (Foucault 1972), the role of diverse publics in shaping the field of (in)security, and renders invisible the presence of (in)security in everyday life (Vaughan-Williams and Stevens 2016:43). To this end, this thesis is unique in considering – for the first time – interaction narratives supplied by BSOs and members of travelling publics circulating regularly within a geographically specific borderland. This thesis is also unique in considering how knowledge generated by such narratives potentially challenges institutional discourses supplied by Canada Border Services Agency (CBSA). Lastly, this thesis is also unique in examining how border technologization and digitization potentially influence frontline social interactions between officers and publics, generate additional knowledge concerning the nature of digitized borders, and function to establish a gulf between institutional discourses and localized frontline practices. This thesis employs a multi-method approach, utilizing: 1) a content analysis and discourse analysis of various primary and secondary institutional documents, 2) content and thematic analyses performed on transcripts generated from in-depth, semi-structured interviews performed with 10 BSOs working in the Windsor borderland, and 3) content and thematic analyses performed on transcripts generated from in-depth, semi-structured interviews performed with 30 members of travelling publics, the vast majority of whom resided in the Windsor borderland at the time interviews were conducted. Combined, official and non-official knowledge generated from interaction narratives provided by participants provides several critiques in terms of analyzing institutional knowledge generated by CBSA. Findings generated through interaction narratives indicate: 1) officers have experienced a shift in “lifeworld” (Habermas 1981) alongside shifts in agency mandates toward a neoliberal risk-management model of mobility governance; 2) officers receive very little formal training in terms of frontline interactions; 3) officer training displays a systematic bias toward constructing all interactions as “security moments” designed to fulfill a security mandate, ultimately leaving officers ill-trained in terms of the “facilitation” (CBSA 2018e:8), non-securitized, humanitarian side of border work; 4) despite being couched by CBSA institutional discourses as being professional, courteous, law-abiding, and thorough, much evidence exists to suggest BSOs act in ways differing substantially from this knowledge, including: officers not performing full primary inspections on travellers, Canadian Charter of Rights and Freedoms violations in terms of officers routinely asking travellers about their mobility while outside of Canada, and a variety of negative frontline interactions including: a) aggressive or unnecessary questioning by officers, b) officers presenting a rude or unfriendly demeanor, c) harassment by officers about purchases made abroad, d) officers unfairly or incorrectly applying policies, e) unnecessary examinations, and f) enforcement actions resulting in the seizure of purchased goods; 5) officers are often forced to develop shared ad hoc best practices in terms of social interactions on the frontline, where there is a real danger of BSOs “parroting” the poor practices of just one or two veteran officers; 6) the existence of a substantial gulf between national policy and training modules and the localized and geographically-specific practices occurring at disparate ports of entry across Canada. Findings generated in terms of the technologization of contemporary borders suggest border security and mobility governance practices are best understood as forms of simulation (Baudrillard 1981) and cyborg work (Bogard 1996), whereby digitized subjects (Goriunova 2019) – which are not at all representative of human subjects – are taken as irrefutable copies or “dividuals” (Deleuze 1992) by border officers, and ultimately become the unit of analysis under neoliberal risk-management schemes in making decisions possible and rendering the personal narratives and performativity of embodied subjects (travellers) effectively irrelevant. Despite CBSA institutional documents couching technologization in terms of improving efficiency at the border, augmenting officer decision-making, and enhancing security provision, official and non-official knowledge gleaned from interaction narratives generated from perceptions related to past social interactions serves to provide a serious critique of these discourses. This includes knowledge concerning perceived deficits related to border technologization, including: 1) discussions of data errors causing travel problems (duplicated NEXUS card numbers, mistaken warrants in the CPIC database, false travel histories in customs databases, and so forth); 2) the advertised benefits of the NEXUS trusted traveller program (efficiency crossing borders) as being either non-existent or irrelevant; 3) the use of Automated Border Clearance (ABC) kiosks / Primary Inspection Kiosks (PIKs) at major Canadian international airports as serving to produce superficial and robotic frontline social interactions guided exclusively by computer-generated risk codes; and 4) the apparent negative effects of technologization in terms of eroding the ability of officers to make informed decisions on the basis of anything other than information provided by computerized databases. Combined, findings generated by comparing institutional knowledge with official and non-official interaction narrative knowledge are subsequently considered through the lens of simulation, human and mobility rights, bureaucratic secrecy, and potential policy change. Additionally, slippage between nationalized institutional discourses and localized frontline practices are explained through the lens of neoliberal systems of power and governance. Finally, avenues for future research are discussed in concluding the thesis.