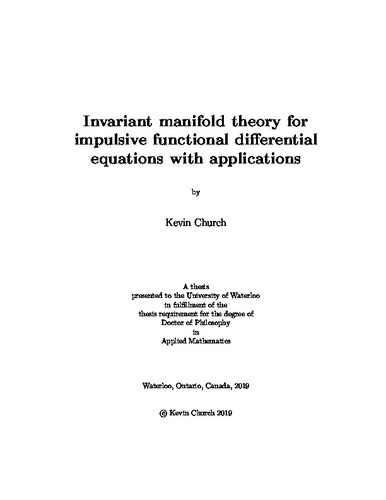 The primary contribution of this thesis is a development of invariant manifold theory for impulsive functional differential equations. We begin with an in-depth analysis of linear systems, immersed in a nonautonomous dynamical systems framework. We prove a variation-of-constants formula, introduce appropriate generalizations of stable, centre and unstable subspaces, and develop a Floquet theory for periodic systems. Using the Lyapunov-Perron method, we prove the existence of local centre manifolds at a nonhyperbolic equilibrium of nonlinear impulsive functional differential equations. Using a formal differentiation procedure in conjunction with machinery from functional analysis -- specifically, contraction mappings on scales of Banach spaces -- we prove that the centre manifold is smooth in the state space. By introducing a coordinate system, we are able to prove that the coefficients of any Taylor expansion of the local centre manifold are unique and sufficiently regular in the time and lag arguments that they can be computed by solving an impulsive boundary-value problem. After proving a reduction principle, this leads naturally to explorations into bifurcation theory, where we establish generalizations of the classical fold and Hopf bifurcations for impulsive delay differential equations. Aside from the centre manifold, we demonstrate the existence and smoothness of stable and unstable manifolds and prove a linearized stability theorem. One of the applications of the theory above is an analysis of a SIR model with pulsed vaccination and finite temporary immunity modeled by a discrete delay. We determine an analytical stability criteria for the disease-free equilibrium and prove the existence of a transcritical bifurcation of periodic solutions at some critical vaccination coverage level for generic system parameters. Then, using numerical continuation and a monodromy operator discretization scheme, we track the bifurcating endemic periodic solution until a Hopf point is identifed. A cylinder bifurcation is observed; the periodic orbit expands into a cylinder in the extended phase space before eventually contracting onto a periodic orbit as the vaccination coverage vanishes. The other application is an impulsive stabilization method based on centre manifold reduction and optimization principles. Assuming a cost structure on the impulsive controller and a desired convergence rate target, we prove that under certain conditions there is always an impulsive controller that can stabilize a nonhyperbolic equilibrium with a trivial unstable subspace, robustly with respect to parameter perturbation, while guaranteeing a minimal cost. We then exploit the low-dimensionality of the centre manifold to develop a two-stage program that can be implemented to compute the optimal controller. To demonstrate the effectiveness of the two-stage program, which we call the centre probe method, we use the method to stabilize a complex network of 100 diffusively coupled nodes at a Hopf point. The cost structure is one that assigns higher cost to controlling of nodes that have more neighbours, while the jump functionals are required to be diagonal -- that is, they do not introduce further coupling. We also introduce a secondary goal, which is that the number of nodes that are controlled is minimized.