A Window into October: Examining the Framing of the October Crisis of 1970 in Canada's English-Language Newspapers 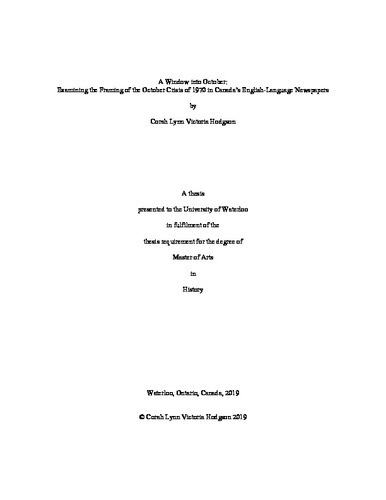 Much of the historiography on the October Crisis has centred around whether the War Measures Act (WMA) represented a necessary deployment of available legislation to crush a threat to national order and security, or an unjustified assault upon civil liberties. Explorations of the media’s presentation of the crisis have produced divergent conclusions, are largely quantitative rather than qualitative in nature, and do not account for regional differences in the media interpretations of the events. This study deploys a content analysis of the editorials in Canada’s most widely circulated English-language newspapers in October 1970 to interrogate how they framed the crisis, evaluated how the government handled developments, and compared to other regional interpretations. Careful attention was accorded to whether the civil libertarian discourse that dominates the historiography was present in contemporary evaluations of the crisis or is a post facto academic construction. This study concluded that a national discourse existed about the crisis in some respects. English-Canadian newspaper editors unanimously framed the FLQ as terrorists, fanatics, and a criminal “cancer” who threatened Canada’s societal and democratic order and whose villainy was clear in their targeting of such innocent and virtuous victims. Descriptions appeared frequently of a populace fearful of the group’s potential to escalate further and united in support of the government’s measures. Newspapers in each region, particularly Atlantic Canada, initially framed the government as facing a dilemma in its decision of whether to capitulate to terror. The papers from Western Canada, Eastern Canada, and Montreal soon shifted to advocate firmly for a hard-line and law-and-order response to terrorism, and pledged their support for the WMA. Although these papers demonstrated some concern about civil liberties, the WMA’s effectiveness, and the government’s secrecy (particularly towards the end of October), they continued to endorse the emergency measures as defensible and necessary. By contrast, the Toronto Daily Star and Globe and Mail recommended the government negotiate for the victims’ release and critically approached the WMA with civil liberties concerns, elucidations of the measures’ dangers, and doubts which outweighed their support. An “alien conspiracy” framing was more prominent in Western and Eastern Canada than in Central Canada, where editors concentrated their attention on identifying the crisis’ internal roots and offering recommendations on how they should be remedied. While anti-FLQ sentiments pervaded the nation, and pro-government and “alien conspiracy” framings formed a dominant discourse throughout much of Canada, it is clear that the historiographical debate on the WMA bore its roots in October 1970. Revealing a more complex discourse than that noted in previous studies, this finding is also significant given the media’s capacity, through framing, agenda-setting, and priming, to influence popular opinion and the public’s comprehension of issues and events.

Corah Lynn Hodgson (2019). A Window into October: Examining the Framing of the October Crisis of 1970 in Canada's English-Language Newspapers. UWSpace. http://hdl.handle.net/10012/14785