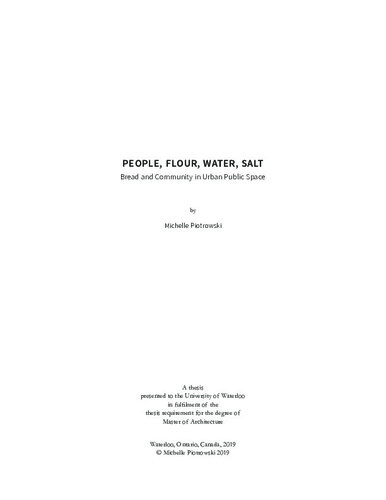 People, Flour, Water, Salt is a proposal for re-thinking the ways in which we connect to and learn from one another in urban public space. Bread is a staple food and cultural artifact, and its production exemplifies the changing dynamics between people, cities, and land across cultures, regions, and time. By focusing on bread as a means to develop community relationships at the micro scale (the person-to-person interactions), we can also begin to examine its effects across various types and scales of exchanges. The process of bread-making then, which begins at the level of enzymes and bacteria, quickly expands to occupy a place of significance at the macro scale, and demands consideration and care for the future of our cities and environments. This thesis proposes the implementation of communal bake ovens in the urban environment to support the development of diverse communities through public and productive space centred around the numerous and varied conceptions of bread. The relationships fostered through shared knowledge, culture, and food in these public spaces serve to mitigate the social isolation and decreased agency that new, immigrant, and low-income populations often experience. Through the introduction of an urban flour mill, the project also challenges the physical and psychological detachment between people and wheat that resulted from the framework of industrialized flour originating in the 19th century, and re-establishes the prominence of local food systems. Following an examination of the historical impact of the growth of wheat and production of bread on the design and organization of cities, the thesis suggests ways in which these processes can inform the shape and character of the city today. Calgary, a city with a growing immigrant population and a rich historical and ongoing relationship with wheat production in Canada, forms the site of the architectural intervention. The design proposal explores the dichotomy between the technical and intuitive natures of bread, and its translation to architectural form through the consideration of materiality, visibility, the physiologies of bread and wheat, microclimates, and the unique thermal gradients of the communal ovens. The built forms and productive landscapes of a larger network of bread in Calgary aim to not only shape the physical environments of the communities in which they reside, but to generate a new narrative surrounding the production and role of bread in a diverse and growing city.