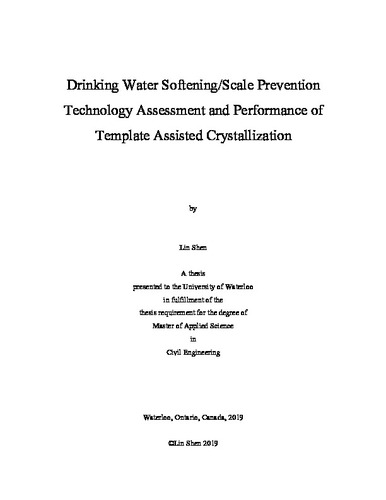 Hard water typically has a hardness concentration over 120 mg/L CaCO3. Hardness is not a regulated drinking water parameter and does not have severe health effects. However, hard water causes more soap and detergent consumption and can cause scaling problems on household heating appliances, distribution pipes, and industrial cooling equipment. There are various approaches to soften hard water or prevent scale formation at the centralized and the household scale. In order to choose the best treatment for a specific set of conditions, an appropriate technology evaluation is necessary. Prior research have tested single technology or compared two or three technologies with respect to their performance. Not many papers have compared all available technologies using the same assessment criteria. At the household scale, point-of-entry (POE) devices are commonly used. Among these, ion exchange is the most widely applied POE device in Canada, though it has two major disadvantages: high sodium concentration in softened water and high chloride content in the brine which is often discharged into the sewer. Hence, there is an increasing interest in adopting salt-free treatment technology. Template assisted crystallization (TAC) is a relatively new household scale prevention technology. TAC media transforms free calcium (Ca2+) and magnesium (Mg2+) ions into insoluble microcrystals. TAC technology has the potential to be an alternative to ion exchange, but there is very little published journals about this technology. Therefore, this study had two objectives: 1) to assess and rank currently available softening and scale prevention technologies at both the centralized and household level, and 2) test the performance of the TAC technology using two source waters. The multi-criteria assessment (MCA) method was utilized to evaluate centralized technologies (lime softening, pellet softening, nanofiltration, and ion exchange) as well as household technologies (TAC, ion exchange, nanofiltration, electrically induced precipitation, magnetic water treatment, and capacitive deionization). Criteria that were chosen in this assessment were: waste disposal, energy requirement, life-cycle cost, efficiency, subsequent treatment needed for finished water, chemical addition, easy to use, and validated technology. The initial assessment assigned a higher weight to the first four criteria listed. A sensitivity analysis (SA) was done by changing the weight assignment of different criteria. Three cases were selected: more focus on waste disposal and energy requirement; more emphasis on cost; iv each criterion shared equal importance. For the centralized technologies assessment, pellet softening had the highest score, followed by ion exchange, lime softening, and nanofiltration. SA results showed that although the total score of each technology varied, the final rank did not change. For the household technologies assessment, TAC had the highest score, followed by ion exchange, magnetic water treatment, electrically induced precipitation, nanofiltration, and capacitive deionization. SA results showed that the total score varied, but the final rank did not change. The performance of TAC technology was assessed using four tests which compared untreated and treated water samples of two selected source waters. The first test measured the reduction of free Ca2+ by a Ca2+ selective electrode after being treated by TAC in two source waters and, test results did not show a lot of reduction with percentage reductions ranging from 4.0% to 5.0% for both locations. The reductions were statistically significant but not large enough to be of much practical value. The second test was to measure the change in total Ca2+ and Mg2+ concentration after TAC. The changes were relatively small in both source waters, with percentage reductions ranging from 2.7% to 4.4% for Ca2+ and 4.0% to 6.9% for Mg2+. Again, the reductions were statistically significant but not large enough to be of much practical value. The third test was a sequential ultrafiltration test utilizing membranes (3000 Da, 1000 Da, and 500 Da) to identify the microcrystal size. This test was not able to isolate substantial amounts of microcrystal, nor did it identify the approximate microcrystal size. The last test was developed as a simplified scale test. Results showed that treated water forms somewhat less scale than untreated water for both source waters. Scale formation potential indices: Langelier Saturation Index (LSI) and Calcium Carbonate Precipitation Potential (CCPP) were also calculated, and results showed that there was essentially no change in both indices after the TAC treatment. Overall, assessment results showed that using this study’s criteria, pellet softening and TAC were the two most suitable technologies to be applied at the centralized and household level, respectively. The TAC performance tests did not establish a substantial reduction in free calcium ions, nor were any crystals isolated. The scale test only showed relatively small differences between untreated and treated water. Future research could construct a flow-through system to test the performance of TAC technology and should also conduct some tests on new and used media.