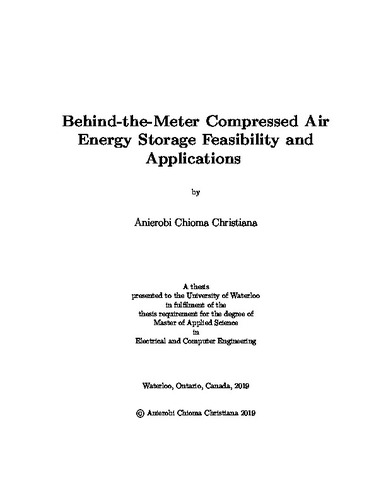 In many jurisdictions, commercial and industrial (C&I) customers are charged for their energy consumption as well as the power drawn from the grid at peak load hours. In Ontario, the demand-based charge component of the electricity cost has been skyrocketing, and this cost often accounts for a significant portion of the overall operating cost of large customers. The Ontario Government in 2010 launched the Industrial Conservation Initiative (ICI) program which requires large customers (Class A) to pay a Global Adjustment (GA) charge, based on their percentage contribution in load during the top five system peak load hours over a one-year base period. This offers enormous savings opportunity to many industrial customers by using strategies to reduce or offset their load during these system peak load hours. However, managing demand can be challenging when faced with production constraints in areas of high-energy sensitive production lines where short interruptions are not permitted. Energy Storage System (ESS) offers the customer the capability to carry out its usual operations while simultaneously saving on the electricity bill through demand reduction. ESS can provide electricity to the facility during system peak periods to reduce the power drawn from the grid, while during non-peak price periods, the ESS is recharged by harnessing the low-cost power. In this work, a detailed operations model of behind-the-meter Small Scale Compressed Air Energy Storage (SS-CAES) is developed for an industrial customer, with an existing well/cavern that can be re-purposed for air storage. The developed optimization model manages the operation of the CAES facility to minimize electricity costs, determining the storage energy output and the corresponding charging and discharging decisions of the SS-CAES system. Furthermore, a detailed economic analysis is carried out to examine financial viability of a practical behind-the-meter SS-CAES project. Some key parameters such as life cycle, CAES capacity and capital cost, and electricity price are considered for carrying out a sensitivity analysis, and the results suggest that SS-CAES is economically viable in the current Ontario rate structure. It is shown that the cost of an SS-CAES project and GA charges are the key determining factors for economic deployment of SS-CAES in Ontario.