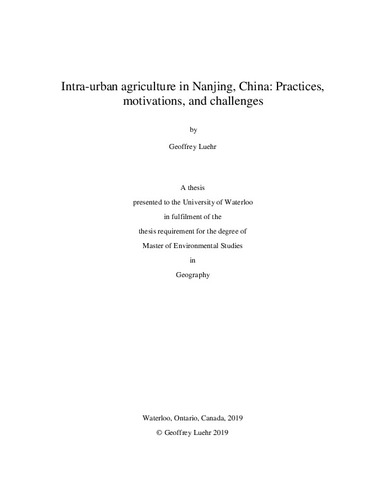 China has experienced strong economic growth in the last three decades through urbanization and economic transitions. However, increasing population and rapid urbanization have resulted in profound social, economic, and ecological challenges, which have also affected China’s food system. These challenges, which include the rapid loss of farmland, environmental degradation and pollution, and the changing and more resource intensive diets of affluent urban citizens, have often been overlooked in favour of economic development. China’s economic focused policies have resulted in criticisms of the country’s food system and concerns surrounding food safety and food scandals have created a high level of mistrust among consumers and producers. As a result, opportunities exist to re-examine how urban spaces in China are being developed and how urban inhabitants are being fed. One promising avenue to ensure the sustainability of urban food systems may be the expansion of urban agriculture into cities. Urban agriculture is a practice that is seen by many scholars as beneficial socially, economically, and environmentally in both post-industrial and developing cities due to its localized food system and urban food production focus. Moreover, urban agriculture can be seen as a pragmatic response to current environmental global discourse about the conventional agricultural system. However, current urban agriculture discourse in China has largely been a state-defined project dominantly concerned with growing food for the city, rather than within it. Amidst these pressures and the noted lack of empirical research on the perceptions and benefits of intra-urban agriculture in China, the purpose of this research is to better understand the motivations of residents practicing urban agriculture and what role it may have in dealing with food-related issues in an urbanized China. This research utilized semi-structured interviews and questionnaires to achieve the following research objectives: (1) to assess the demographics of small-scale, individual intra-urban agriculture practices within Nanjing and where it is taking place, (2) to identify the various modes of intra-urban agriculture in Nanjing, (3) to determine the motivations of populations engaging in small-scale intra-urban agriculture, and (4) to identify how China’s evolving socio-political and economic context and increasing integration within global institutional and market networks affects urban agriculture development. This study found that intra-urban agriculture in China remains largely an informal practice, dominated primarily by older, working-class individuals growing vegetables on yards, balconies, rooftops, in “empty” non-built-up spaces in the around the city and on areas of ceased development. Moreover, participants mentioned several social wellbeing/health benefits. Lastly, non-monetary values associated with growing included freshness, food safety and recreation. Challenges among participants included: space limitations, weather, soil quality, age, confrontations with construction crews and other city officials. Based on the literature and interviews with government officials in Nanjing, it would appear that within a Chinese context the government sees or defines intra-urban agriculture as a means of modernization, with mixed high-tech plans of urban integration and rural revitalization (multifunctional) of peri-urban agriculture projects. This is juxtaposed with growing civic agriculture movements around China that continue to align more with urban agriculture movements seen in the Global North (e.g.,food sovereignty, against industrial agriculture) and opposes what is happening informally on the ground in Nanjing. In sum, the notable diversity of motivations for urban farmers that exist within Nanjing challenges many of the assumptions about urban agriculture as being a dominantly urban poor activity in the Global South.