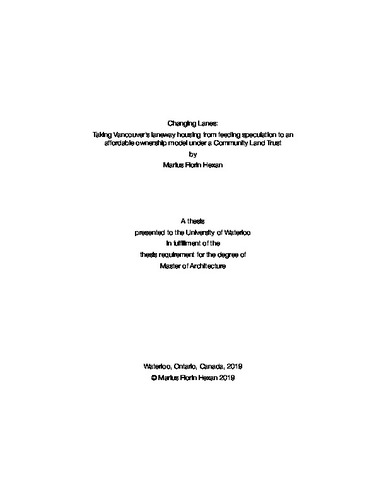 Towards the end of 2017, after consultation with a series of reports, studies, and advisory groups, the Vancouver City Council has published the Housing Vancouver Strategy (2018-2027) and 3-Year Action Plan (2018-2020) policy report. This latest ten year plan, set out by the city, highlights a series of strategies in addressing the so called worsening housing affordability crisis. The report mentions Vancouver’s wishes of promoting a healthy, diverse, and vibrant city that endorses affordability for all of its diverse population. However, in general Canadian housing programs have been plagued by policy favoring not the improvement of living standards for marginalized households but largely unrelated goals such as private profitability. The report explicitly mentions an engagement with housing policymakers and experts from around the world, yet what it fails to mention is that Housing Crisis is not a result of the economic system breaking down, but of it working exactly as intended. What needs to be said is that the ever widening gap between the wealthiest and most vulnerable households of cities across the world is built into the capitalist system - more specifically the concepts and laws related to private property. As it stands, housing trends within Vancouver seem to be driven by developers towards higher density housing options that are affordable to less and less of the bottom half earners within the city. As such, the housing created is then quickly transformed by higher income individuals into financial assets upheld by the less wealthy as they are given no other choice but rent. This in turn creates hostility within the city towards the housing system and the individuals inflating the speculative appreciation of property. What I would like to ask is if the least dense and hence toughest typology that the City has identified in its Housing Vancouver Strategy report (laneway homes) can be turned into a truly innovative and affordable housing option? Could Vancouver laneway housing be conceived as a tool used to build towards long term affordable housing rather than just another speculative option? Furthermore, could the bottom half earning households be provided with an ownership option that allows them to build equity over time while promoting housing use value? What I would like to investigate is whether a re-evaluation of the concepts of private property and value of housing would then allow the least dense & affordable housing typology within Vancouver become a powerful means of providing marginalized households with the opportunity to change the city more after their heart’s desire.