Motor Control For Human Jumping To A Target 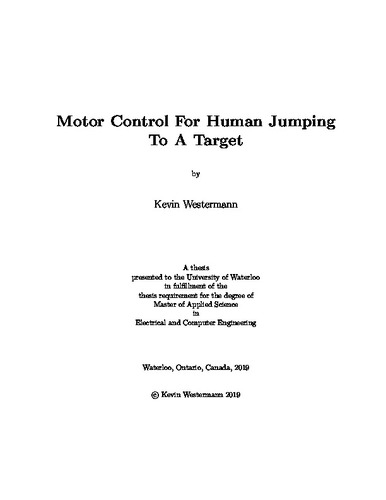 Investigating how humans perform dynamic movements is important for applications such as movement rehabilitation, sports training, humanoid robot design and control, and human-robot interaction. There are several hypotheses as to how humans perform dynamic movements based on movement variability, task optimization, and motor learning concepts. This thesis develops a methodology for analyzing dynamic movements, determining what factors are crucial to task success, and understanding the motor learning process. The jumping to a target movement was chosen as the exemplar motion for investigating human dynamic motor control because of the following reasons: the movement difficulty can be scaled to a person's physical characteristics and ability; jumping to a target is a movement that many people can perform but few have practiced, making it a good candidate for investigating motor learning; jumping to target has a clear metric for success, enabling novice-expert classification of participants based on objective task performance. Additionally, existing human jumping research has focused primarily on maximum height vertical jumping or maximum distance long jumping. This thesis is the first known work to investigate the kinematics and motor control of the standing broad jump to a target. An experiment was conducted to collect motion capture data of 22 participants (ages 19-34 years, 9 females and 13 males), each performing 12 jumps to three specified targets of various distances. These motion capture data were used with Extended Kalman Filter pose estimation to extract the kinematic joint trajectories of each jump, and the center of mass (CoM) trajectories were then computed. Analysis of these trajectories then proceeded in two stages. A kinematic trajectory analysis was performed to identify trends between the jumping trajectories and jump success. The identified trends, and other information found in the literature, were used to generate hypotheses for using a sliding window Inverse Optimal Control (IOC) approach for identifying optimized motor control tasks. The findings from the kinematic trajectory analysis of jumping motion trajectories suggest a strong relation between the jumper controlling the velocity of their CoM at takeoff and the success of the jump. The angle and magnitude of the takeoff velocity must be matched to generate an appropriate ballistic trajectory to reach the desired target. At landing, the jumper can use their foot placement pose to correct for inaccuracy in their takeoff velocity and CoM trajectory to still land on the target. Novice jumpers demonstrated more consistent CoM takeoff velocities as they performed more jumps, however it was less likely that their foot placement control improved noticeably during the study. Expert jumpers were observed to control their foot placement pose more effectively, therefore making higher jumping success rates possible even when the variability of their CoM takeoff velocity was greater than some novice jumpers. A sliding window IOC approach was used to estimate what motor control tasks jumpers optimize throughout the movement. The cost terms of the objective function were designed based on jumping-specific control tasks and criteria relevant to general human motion. The recovered IOC cost term weights were averaged over different sets of jump features. Changes in average cost term weights were observed relative to jump grade, target distance, and jump performance. Experts were observed to optimize CoM forward velocity before takeoff more than novice jumpers, who optimized CoM height more. As novice jumpers improved their success rate during the experiment, their motor control behavior more closely resembled that of experts. The IOC approach demonstrates evidence for a repeatable, general optimal motor control method for jumping to a target. Parallels were also drawn between the kinematic trajectory results and IOC motor control task results. Optimizing for the CoM velocity control task before takeoff and toe velocity control task prior to landing, as identified in the IOC results, can be related to controlling takeoff velocity and foot placement pose respectively, as observed in the kinematic analysis. Finally, the IOC sliding window approach was used alongside unsupervised clustering techniques to identify four jump styles into which experiment participants could be categorized into. All style groups included novice and expert jumpers, and were independent of jump success or motor learning, suggesting there are multiple general motor control patterns that can be used for successfully jumping to a target. This analysis framework can be extended to analyzing jumping motions in varied environment conditions, or be used to define the motor control methods of other dynamic human motions.