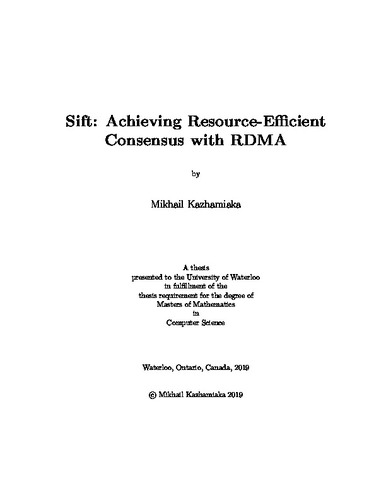 Sift is a new consensus protocol for replicating state machines. It disaggregates CPU and memory consumption by creating a novel system architecture enabled by one-sided RDMA operations. We show that this system architecture allows us to develop a consensus protocol which centralizes the replication logic. The result is a simplified protocol design with less complex interactions between the participants of the consensus group compared to traditional protocols. The dissaggregated design also enables Sift to reduce deployment costs by sharing backup computational nodes across consensus groups deployed within the same cloud environment. The required storage resources can be further reduced by integrating erasure codes without making significant changes to our protocol. Evaluation results show that in a cloud environment with 100 groups where each group can support up to 2 simultaneous failures, Sift can reduce the cost by 56% compared to an RDMA-based Raft deployment.