Interactions of Phosphate and Silicate with Iron oxides in Freshwater Environments 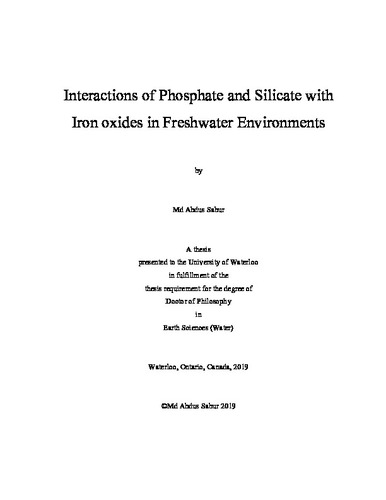 Internal phosphorus loads, from bottom sediments to surface waters, are often comparable in magnitude to external phosphorus loads, particularly in water bodies with a history of high external phosphorus inputs from point and non-point sources. The benthic release of phosphorus can be influenced by several factors including pH, redox potential, temperature, microbial activity and the concentration of competitive anions at or near the sediment-water interface. Dissolved silicate occurs ubiquitously in natural waters and may act as a competitive ion to phosphate. Nonetheless, prior to the work in this thesis, the effect of silicate on internal phosphorus loading remained poorly understood. This thesis addresses several of the mechanisms through which silicate may influence the mobilization of aqueous phosphate from sediments in aquatic environments. The thesis starts with a thorough literature review of phosphorus biogeochemical cycling in relation to eutrophication, sediment-surface water interactions, mineralogy, competitive anions and microbial activity (Chapter 1). Next, adsorption/desorption of phosphate on/from goethite, a model ferric (hydr)oxide mineral, is investigated in the absence and presence of dissolved silicate. The influence of dissolved silicate on phosphate adsorption is evaluated through laboratory experiments and application of the CD-MUSIC model (Chapter 2). The results show that increasing concentrations of silicate decrease phosphate adsorption, leaving more phosphate in the aqueous phase. The competitive effect of dissolved silicate is more pronounced under alkaline conditions. Subsequently, phosphate desorption experiments were conducted under dynamic pH conditions in the presence and absence of silicate (Chapter 3). The experimental results show that the gradual transition from acidic to alkaline conditions induces the desorption of phosphate adsorbed to goethite under acidic conditions. The presence of silicate in the phosphate/goethite system does not affect phosphate desorption, because of the stronger surface complexation of phosphate to goethite. In addition to adsorption and desorption processes, the co-precipitation of phosphate with iron and the potential subsequent dissolution of these co-precipitates as a result of changing physico-chemical conditions may also control the mobility of phosphate in aquatic environments. The effects of dissolved silicate on the co-precipitation of phosphate with iron and the reactivity of the resulting solids are examined (Chapter 4). Ferric (co)-precipitates (i.e., Fe-P-Si) with variable Si:Fe ratios, were synthesized either via oxidation of Fe2+(aq) or by increasing the pH of Fe3+(aq) solution. The solids were characterized by a combination of chemical and spectroscopic techniques including attenuated total internal reflectance Fourier transform infrared spectroscopy (ATR-FTIR) and X-ray powder diffraction spectroscopy (XRD). Similar solid phase P:Fe ratios were found in co-precipitates formed from solutions with different dissolved silicate concentrations, regardless of the method of preparation. This suggests that the interactions between phosphate and iron during co-precipitation were not affected by dissolved silicate. The ferric (co)-precipitates were subsequently reductively dissolved abiotically in buffered ascorbate-citrate solution to determine their reactivity under reducing conditions. The kinetic data show that the co-precipitates with higher Si:Fe ratios were more recalcitrant to dissolution. For co-precipitates synthesized via oxidation of Fe2+(aq), reductive dissolution experiments were also conducted in the presence of the facultative anaerobic iron reducing bacteria Shewanella putrefaciens. XRD analyses of the residual solids imply that solids with the higher Si:Fe ratios may be more resistant to microbially mediated reductive dissolution. The relative reactivities of the co-precipitates obtained by the two synthesis methods are also addressed in Chapter 4. In Chapter 5, the effect of silicate on the mobility of phosphate in a natural sediment was evaluated via flow-through experiments. The results show that dissolved silicate enhances the mobility of phosphate at the sediment-water interface. Ferric (co)-precipitates were formed at the oxic surface of sediment columns via the oxidation of ferrous iron supplied with upflowing solutions containing variable silicate concentrations. The subsequent dissolution of these co-precipitates under imposed anoxic conditions at the sediment-water interface indicates that the co-precipitates formed at higher dissolved silicate concentrations were more reactive towards reductive dissolution. These results are therefore in apparent contradiction to those observed in Chapter 4. The ferric (co)-precipitates (i.e., Fe-P-Si) evaluated in Chapter 4 were prepared from solutions containing high concentrations of iron, phosphate and silicate, by imposing either rapid aeration or pH increase. These conditions were selected to maximize the yield from the syntheses. The synthesis methods in Chapter 4 are therefore most representative of aquatic environments where co-precipitation occurs rapidly (e.g., groundwater springs) and the concentrations of these dissolved constituents are fairly high. However, in many other aquatic environments, the diffusion-controlled release of Fe2+(aq) from the deeper sediments results in the gradual oxidation of Fe2+ at the sediment-water interface under oxic conditions. This process is typical in lake sediments with minimal advective exchange between surface water and groundwater. This gradual oxidation (at relatively low concentrations of Fe2+) results in the slow formation of ferric (co)-precipitates which may be dissimilar to those synthesized herein and discussed in Chapter 4. The ferric (co)-precipitates synthesized with the flow-through column system in Chapter 5 may be better analogues of slow forming co-precipitates in diffusion dominated or moderately advection influenced aquatic sediments than those synthesized in Chapter 4. Finally, to elucidate the likely importance of the various influences of dissolved silicate on phosphate mobility investigated in this thesis, concentrations of dissolved phosphate and silicate as well as pH data are extracted from the US National Water Information System (NWIS) network (data shown in Chapter 1 and Chapter 2). The NWIS data along with combined experimental and modeling results suggest that silicate-mediated phosphate mobilization is likely a commonly occurring process at the sediment-water interface of lakes and reservoirs. This thesis also demonstrates the multiple roles of silicate on the mobilization of phosphate in aquatic environments, and improves our fundamental knowledge of iron, phosphorus and silicon cycling in freshwater environments.