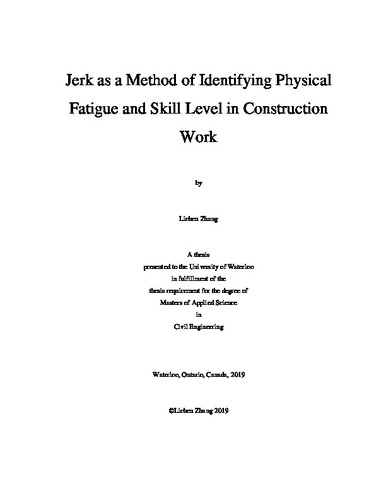 Researchers have shown that physically demanding work, characterized by forceful exertions, repetition, and prolonged duration can result in fatigue. Physical fatigue has been identified as a risk factor for both acute and cumulative injuries. Thus, monitoring worker fatigue levels is highly important in health and safety programs as it supports proactive measures to prevent or reduce instances of injury to workers. Recent advancements in sensing technologies, including inertial measurement units (IMUs), present an opportunity for the real-time assessment of individuals' physical exposures. These sensors also exceed the ability of mature motion capture technologies to accurately provide fundamental parameters such as acceleration and its derivative, jerk. Although jerk has been used for a variety of clinical application to assess motor control, it has seldom been studied for applications in physically-demanding occupations that are directly related to physical fatigue detection. This research uses IMU-based motion tracking suits to evaluate the use of jerk to detect changes in motor control. Since fatigue degrades motor control, and thus motion smoothness, it is expected that jerk values will increase with fatigue. Jerk can be felt as the change in force on the body leading to biomechanical injuries over time. Although it is known that fatigue contributes to a decline in motor control, there are no explicit studies that show the relationship between jerk and fatigue. In addition, jerk as it relates to skill level of highly repetitive and demanding work has also remained unexplored. To examine these relationships, our first study evaluates: 1) the use of jerk to detect changes in motor control arising from physical exertion and 2) differences in jerk values between motions performed by workers with varying skill levels. Additionally, we conducted a second study to assess the suitability of machine learning techniques for automated physical fatigue monitoring. Bricklaying experiments were conducted with participants recruited from the Ontario Brick and Stone Mason apprenticeship program. Participants were classified into four groups based on their level of masonry experience including novices, first-year apprentices, third-year apprentices, and journeymen who have greater than five years of experience. In our first study, jerk analysis was carried out on eleven body segments, namely the pelvis, and the dominant and non-dominant upper and lower limb segments. Our findings show that jerk values were consistently lowest for journeymen and highest for third-year apprentices across all eleven body segments. These findings suggest that the experience that journeymen gain over the course of their career improves their ability to perform repetitive heavy lifts with smoother motions and greater control. Third-year apprentices performed lifts with the greatest jerk values, indicating poor motor performance. Attributed to this finding was the pressure that third-year apprentices felt to match their production levels to that of journeymen’s, leading third-year apprentices to use jerkier, less controlled motions. Novices and first-year apprentices showed more caution towards risks of injury, moving with greater motor control, compared to the more experienced third-year apprentices. However, the production levels of novices and first-year apprentices falter far behind the production levels of other experience groups. Detectable increases between jerk values during the beginning (rested) and end (exerted) of the task were found only for the journeymen, which is attributed to their greater interpersonal similarities in learned technique and work pace. In our second study, we investigated the use of support-vector machines (SVM) to automate the monitoring of physical exertion levels using jerk. The jerk values of the pelvis, upper arms, and thighs were used to classify inter-and intra-subject rested and exerted states. As expected, classification results demonstrated a significantly higher intra-subject rested/exerted classification than the inter-subject classification. On average, intra-subject classification achieved an accuracy of 94% for the wall building experiment and 80% for the first-course-of-masonry-units experiment. The thesis findings lead us to conclude that: 1) jerk changes resulting from physical exertion and skill level can be assessed using IMUs, and 2) SVMs have the ability to automatically classify rested and exerted movements. The investigated jerk analysis holds promise for in-situ and real-time monitoring of physical exertion and fatigue which can help in reducing work-related injuries and illnesses.