Breaking Through the Monopoly City: A Game of Urban Agriculture Played Through Fissures in Industrial Urbanism 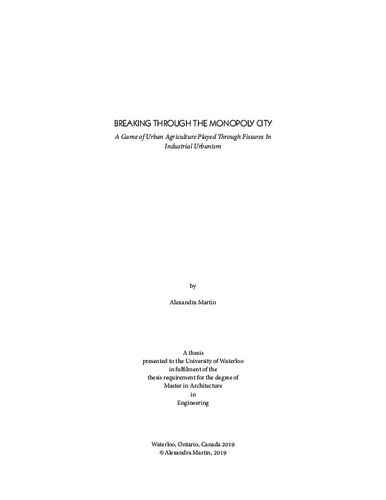 Games have been used throughout the world’s cultures to teach and influence ideas of urban space and planning while also arguing that in the future of sustainable cities architectural development of urban land should inherently be linked to the productive use of land. This thesis proposes a game, designed using theories linked to urban agriculture to encourage thought about possibilities of future urban development, exploring aspects of the value of land in economic development and success of urban farming. Detroit is used as a case study for these urban agricultural principles. The global population is increasing, todays 7.6 billion is expected to grow to over 11 billion by the year 2100 . With over 3 billion more mouths to house and feed, we must consider what our future cities will need to look like and how they will function with resilience and sustainability. As humanity has urbanized it has distanced itself from food sources, relegating agricultural production to some pictorial idea of “countryside” that does not accurately depict our methods of massive industrial production. Today it is estimated that 50% of the worlds livable land is used for agriculture . While the global population continues to grow so will the demand for arable land, coupled with climate change the future of global food sustainability is at risk. With industrial urban practices ingrained into our conception of what the City is, the fundamental question becomes; how do we begin to reshape our understanding of what urban means? The game proposed in this thesis, Commonopoly, presents an adoption of this kind of urban thinking. The industrial era game of capital and property management, Monopoly, is broken apart to facilitate new exploratory play in which players need to reconsider the value and condition of land as no longer entirely abstracted to pure monetary value. Players are not rewarded simply for owning land and receiving rent. They must actively develop, adding human value to the inherent value of land using the principles of urban agriculture built into the rules and forms of the game, combining labour and resources with other players as they do so. Commonopoly is engaging and fun, while introducing ideas about alternative ways of creating and existing within urban space and a capitalist economy. Players of Commonopoly who become interested in this game may then find themselves further exploring topics of game analysis, agriculture urbanism, economics, Detroit, industrial urbanism and the process of game making within this thesis book. The ideal city, in the extension of this thesis is the perfect hybrid of urban, rural, and wilderness. That, however, is far too broad. For simplification the study of the development of this kind of city begins with urban agriculture, explored through play.

Alexandra Martin (2019). Breaking Through the Monopoly City: A Game of Urban Agriculture Played Through Fissures in Industrial Urbanism. UWSpace. http://hdl.handle.net/10012/14565