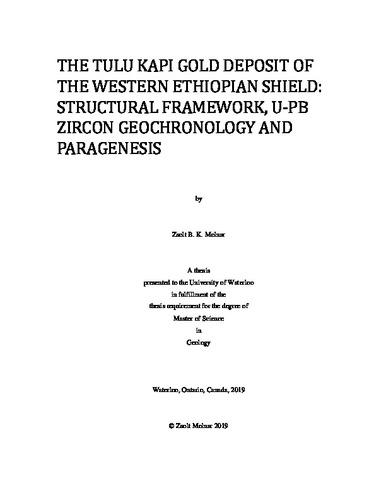 Gold production dates back millennia in the Arabian Nubian Shield. Most of the mined deposits are in the northern portions of the shield, with little know about its southern extent. Tulu Kapi is a rare example of a gold deposit in the southern Arabian Nubian Shield. Tulu Kapi is located in a greenstone belt, whose central feature is the transcontinental Tuludimtu shear zone, in the Western Ethiopian Shield. U–Pb zircon geochronology indicates that the Tulu Kapi deposit is hosted by the 738 ± 2.6 Ma Tulu Kapi syenite, which is juxtaposed against the 699 ± 2.7 Ma Kapi Gabbro. Both intrusions are bordered by the Bedele shear zone to the east, which is a splay off the Tuludimtu shear zone. The Tulu Kapi syenite is host to brittle structures as which contrasts the surrounding volcanic and sedimentary rocks, which are relatively the ductile. Gold mineralization and alteration are found throughout the Tulu Kapi syenite in en-echelon vein arrays and related structures, which are controlled by conjugate shear zones in the syenite. The most intensely deformed area of the gold deposit takes the form a plunging shoot at the footwall of the syenite. The shoot consists of superimposed brittle structures found at a three-way contact. Intense alteration, veining and gold mineralization are indicative of the shoot’s role as a crucial fluid pathway in the deposit. In the centre of the deposit, the shoot intersects a dyke swarm where the focused fluid pathway disperses into the en-echelon vein arrays and adjoining structures which network through the syenite forming the gold deposit.