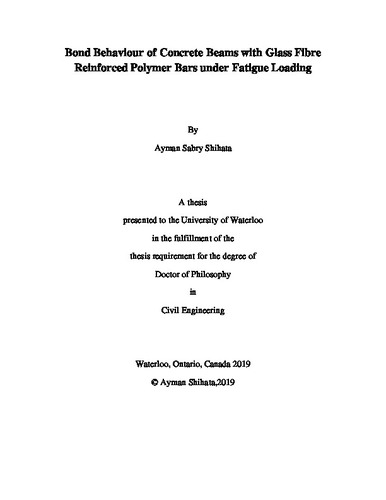 Since the 1980s and after the aerospace industries faced several periods of economic difficulty, the companies that produced fibre-reinforced polymers (FRPs) started to introduce them as new materials for construction purposes. In one such application, FRPs were proposed for use instead of steel reinforcement in concrete due their mechanical properties including corrosion-resistance, high tensile strength, and light weight. On the other hand, FRPs have a lower modulus of elasticity compared to the steel reinforcement, which can lead to excessive deflection of the reinforced concrete member. Prestressing of the FRP reinforcement was a solution to overcome this serviceability concern. Previous research has been conducted to study the mechanical properties of carbon and aramid fibre reinforced polymers as prestressed reinforcement. Less attention has been given to glass fibre reinforced polymers as prestressing reinforcement because of its high relaxation and creep rupture. Only limited data on the behaviour of the prestressed GFRP under fatigue loading is available. Also, no design guidelines are provided in CAN/CSA-S806-12 or ACI 440.4R-04 for using prestressed GFRP bars in concrete members. In order to address this knowledge gap, the current study included testing of forty-six GFRP reinforced concrete beams to investigate the bond mechanisms between the GFRP bar and concrete under monotonic and fatigue loading. Each beam was reinforced on the tension side with a single GFRP bar. This study was divided into two phases: a first phase (preliminary study) and a second phase (main study). The main objectives of the preliminary study were to investigate the effect of different variables on the bond mechanism between the GFRP bar and the concrete and choose the most important variables that affect the bond strength between the GFRP bar and the concrete for the main study. Sixteen reinforced concrete beams were cast and tested under monotonic loading. The test variables included in the preliminary study were bar diameter, bar surface type, concrete cover, and prestressing level. The beam geometry was 150 mm wide by 225 or 250 mm high by 2400 mm long with concrete cover equal to 25 mm. For the main study, thirty reinforced concrete beams were cast and tested under monotonic and fatigue loading. The beams dimension was 200 mm in width and 2000 in length. The beams depth and height were varied depends on the clear concrete cover. For the beams with concrete cover of 25 mm the beams height and depth to the flexural reinforcing were 265 mm and 235 mm, respectively. For the beams with concrete cover of 45 mm the beams height and depth were 295 mm and 240 mm, respectively. The test variables included in the main study were bar surface type, concrete cover, and prestressing level. For the beams tested under fatigue loading, the minimum applied load was 10 % of the static failure load. The peak load was varied to study the effect of load range on fatigue life. The test frequency for all cyclic test was 1.0 Hz. All of the beams that were tested under monotonic loading failed in bond between the GFRP bar and the concrete. Increasing the concrete cover increased the ultimate beam capacity by almost 20%. For all of the beams tested under monotonic loading, there was no noticeable difference in ultimate load between the beams reinforced with a sand coated GFRP bar and beams reinforced with a ribbed GFRP bar. For the beams tested under fatigue loading, two failure modes were observed, bond failure between the GFRP bar and the concrete and rupture of the GFRP bar. For the beams that failed in bond, the slope of the load and stress versus fatigue life curves is shallow and consequently a small change in load range will result in a large change in the fatigue life. Increasing the concrete cover thickness increased the fatigue strength. Comparing the load range (kN) versus life curve for the non-prestressed and prestressed beams that failed in bond, shows that the prestressed beams had longer lives than the non-prestressed beams. A crack growth model based on the one developed by Wahab et al., 2015 was used to calculate fatigue lives and to predict the crack length versus the number of cycles. The calculated number of cycles was in good agreement with the data for the beams with different concrete thicknesses. The model captured the general trends in the test data (e.g. shape of the crack length versus number of cycle curves) and gave good representations of the initial crack length.