“Lucky that East Germany also exists”: Yugoslavia between the Federal Republic of Germany and the German Democratic Republic (1955-1968) 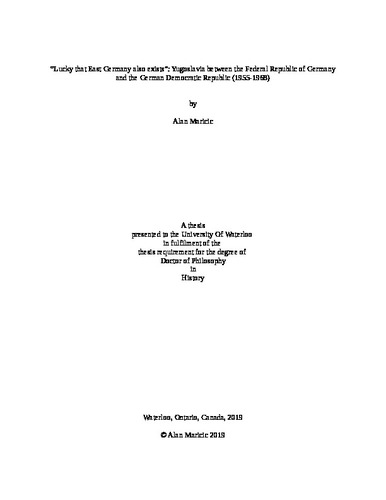 This dissertation explores the relations between Yugoslavia and the Federal Republic of Germany (FRG) and the German Democratic Republic (GDR) in the period between 1955 and 1968. This is the first analysis using sources from all three countries, and the first one written in English. In 1955, the FRG developed a set of diplomatic measures which aimed to prevent the GDR’s international recognition as a sovereign country. These measures became known as the Hallstein Doctrine, named after one of the West German civil servants responsible for developing them. Under these measures, the FRG would break off diplomatic relations with any third country that recognized the GDR. Thus the two Germanies became involved in a diplomatic battle, with the GDR searching for recognition and the FRG trying to thwart these efforts. Much of the GDR’s counter-efforts in the early years of the Doctrine were aimed at Yugoslavia, which was in the process of rebuilding its relations with the Soviet Union following the Tito-Stalin split in 1948. This development opened the door for Yugoslav cooperation with other Eastern Bloc countries, including the GDR. In 1957, Yugoslavia finally recognized the GDR. This caused the FRG broke off relations with Yugoslavia, a decision it would reverse eleven years later, in 1968. This dissertation shows that Yugoslavia’s decision to recognize the GDR did not reflect its general foreign policy goals, and that in subsequent years, Yugoslavia was more concerned with developing good economic relations with the FRG. This dissertation also shows that the GDR expected Yugoslavia to influence other non-aligned countries to recognize it, but that Yugoslavia was reluctant to jeopardize its position in the non-aligned world by lobbying for the GDR. By using multi-archival sources, this dissertation examines the relations between Yugoslavia and the two Germanies, focusing on their bilateral relations and agency, but also takes into account the broader Cold War context, including superpower interests and Yugoslavia’s role as a leading non-aligned country.