Numerical Modelling of Wind Storms in the Lower Great Lakes 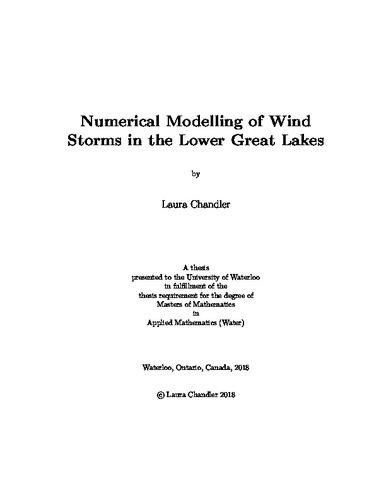 Convective storms are incredible meteorological events; the impact of just one storm can be extreme and widespread. On July 21 1998, a convective storm formed west of Lake Michigan, moving quickly across the lower Great Lakes region. The damage due to this storm was widespread, with one of the most impacted areas being Ontario's Rondeau Park on the north shore of Lake Erie, where over half of the trees in the park fell due to wind stress. In this thesis, wind speed and wind gust data from Erieau, Ontario and Detroit, Michigan are used to provide a climatology of typical wind speeds in the region, determining that high wind speeds are rare and short-lived during the summer months of June, July, and August. Wind speed, gust speed, radar, and reanalysis data are analyzed to characterize the 1998 storm, providing evidence that the storm in question is exceptional in both longevity as well as high sustained wind and gust speeds. Within the summer months, the existence of such a wind event is found to be uncommon. The Weather Research and Forecasting (WRF) model is used to perform simulations of the storm. A fine resolution simulation is found to capture the general shape and intensity of the storm and is used to provide further characteristics of the simulated storm. Large convective available potential energy (CAPE) and significant low-level shear are found to be present in the domain during the formation and propagation of the storm. The storm grows to have a radius of 250 km and travels over 1000 km before eventually dissipating. Over Rondeau Park, an additional downburst forms in the region as the main front of the storm passes, acting to heighten and lengthen the effects of observed wind at the park. An additional coarse resolution simulation is performed to determine the effects of resolution and convective parameterization on storm propagation and general wind speeds. It is found that the coarser resolution and parameterization of convective up- and downdrafts act to dampen the wind speeds experienced at the park and decrease the areal extent of the storm. To determine the sensitivity of the storm to Lake Erie and Lake St. Clair, a simulation is performed in which both lakes are replaced by forests. This simulation shows that the wind speed and general shape of the storm is greatly enhanced by lakes over a large region and particularly at Rondeau Park.