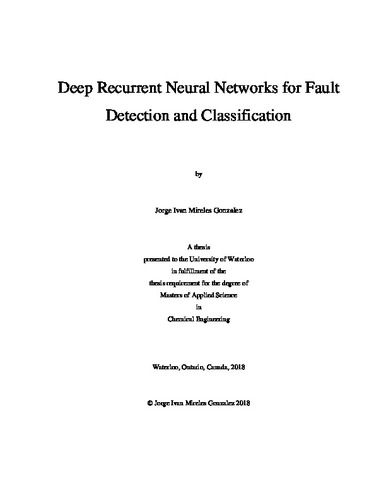 Deep Learning is one of the fastest growing research topics in process systems engineering due to the ability of deep learning models to represent and predict non-linear behavior in many applications. However, the application of these models in chemical engineering is still in its infancy. Thus, a key goal of this work is assessing the capabilities of deep-learning based models in a chemical engineering applications. The specific focus in the current work is detection and classification of faults in a large industrial plant involving several chemical unit operations. Towards this goal we compare the efficacy of a deep learning based algorithm to other state-of-the-art multivariate statistical based techniques for fault detection and classification. The comparison is conducted using simulated data from a chemical benchmark case study that has been often used to test fault detection algorithms, the Tennessee Eastman Process (TEP). A real time online scheme is proposed in the current work that enhances the detection and classifications of all the faults occurring in the simulation. This is accomplished by formulating a fault-detection model capable of describing the dynamic nonlinear relationships among the output variables and manipulated variables that can be measured in the Tennessee Eastman Process during the occurrence of faults or in the absence of them. In particular, we are focusing on specific faults that cannot be correctly detected and classified by traditional statistical methods nor by simpler Artificial Neural Networks (ANN). To increase the detectability of these faults, a deep Recurrent Neural Network (RNN) is programmed that uses dynamic information of the process along a pre-specified time horizon. In this research we first studied the effect of the number of samples feed into the RNN in order to capture more dynamical information of the faults and showed that accuracy increases with this number e.g. average classification rates were 79.8%, 80.3%, 81% and 84% for the RNN with 5, 15, 25 and 100 number of samples respectively. As well, to increase the classification accuracy of difficult to observe faults we developed a hierarchical structure where faults are grouped into subsets and classified with separate models for each subset. Also, to improve the classification for faults that resulted in responses with low signal to noise ratio excitation was added to the process through an implementation of a pseudo random signal(PRS). By applying the hierarchical structure there is an increment on the signal-to-noise ratio of faults 3 and 9, which translates in an improvement in the classification accuracy in both of these faults by 43.0% and 17.2% respectively for the case of 100 number of samples and by 8.7% and 23.4% for 25 number samples. On the other hand, applying a PRS to excite the system has showed a dramatic increase in the classification rates of the normal state to 88.7% and fault 15 up to 76.4%. Therefore, the proposed method is able to improve considerably both the detection and classification accuracy of several observable faults, as well as faults considered to be unobservable when using other detection algorithms. Overall, the comparison of the deep learning algorithms with Dynamic PCA (Principal Component Analysis) techniques showed a clear superiority of the deep learning techniques in classifying faults in nonlinear dynamic processes. Finally, we develop these same techniques to different operational modes of the TEP simulation, achieving comparable improvements to the classification accuracies.