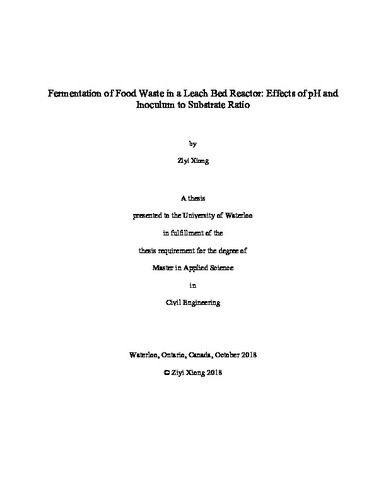 A more sustainable method for the treatment of accumulated food waste, instead of landfilling, is in urgently need. Fermentation is one of the most promising waste-to-energy technologies for energy recovery from food waste. This study investigated food waste fermentation in a leach bed reactor (LBR) under different operating conditions, i.e. pH and inoculum to substrate ratio. Firstly, for the impact of pH, the food waste fermentation was investigated in a leach bed reactor operated at acidic, neutral and alkaline conditions. Highest solids reduction of 87% was obtained at pH 7 in 14 days of reaction time with minimum mixing. The concentration of volatile fatty acids increased to 28.6 gCOD/L under pH 7, while the highest butyric acid of 16 g COD/L was obtained at pH 6. Bacterial community structure was narrowed down to Bifidobacterium and Clostridium at pH 6, while Bacteroides and Dysgonomonas were identified as main players at both pH 7 and 8. Bacterial populations in the food residue generally reflected those in the leachate, but some bacteria were selectively enriched in the leachate or the food residue. Bacterial community dynamics suggested that biodegradable food waste was first fermented by one of the dominant players (e.g., Clostridium) and the other degraded resistant dietary fibers later (e.g., Bifidobacterium, Bacteroides, Dysgonomonas). Secondly, for the impact of inoculum to substrate ratio, the food waste fermentation was carried out at ISRs of 5%, 10% and 15% (vs/vs). A maximum sCOD concentration of 30-33g/L was obtained under all ISR conditions. Correspondingly, a high degradation efficiency of 85%-91% was obtained at ISR 5%, 10% and 15%, respectively. A faster hydrolysis rate and a shorter reaction time was obtained under ISR 10%, which suggested a higher ISR can accelerate the hydrolysis rate of the food waste, which lead to a decrease in digestion time. The VFA concentration (24-28g COD/L) and distribution under three ISR conditions had negligible differences, indicating that ISR did not have an influence on the acidogenesis of food waste in this study.