Towards the Development of a ϕC31Int-Competent Sf9 Cell Line 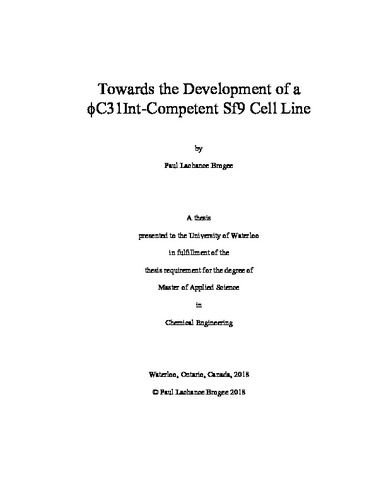 The Sf9 cell line, as a component of the Baculovirus Expression Vector System (BEVS), is a popular platform for industrial-scale production of protein products. However, the natural course of the BEVS results in host-cell lysis before many down-stream protein modifications can be made, making it suboptimal for production of complex products such as membrane or glycosylated proteins. Stably transforming a Sf9 cell line for constitutive expression of a gene product can effectively circumvent this issue, however the process of developing these cell lines remains inefficient and time-consuming. Synthetic biology is a field of research that approaches biological problems through the lens of engineering design. With this in mind, a design for a Sf9 line was developed that leverages ϕC31 Integrase technology to facilitate Recombinase Mediated Cassette Exchange (RMCE) in vivo in the Sf9 host cell. RMCE is a type of site-specific DNA recombination that results in the exchange of a DNA cassette from, in this case, a donor plasmid to a genomic locus within the host cell. A pair of fluorescent reporter proteins, mAzamiGreen and mKOk, were tested to determine their suitability for use in confirming successful cassette exchange in Sf9. These were found to be easily differentiable in both mixed culture and co-transfection scenarios. Additionally, some insight was gleaned with respect to media formulation when performing a limiting dilution protocol on Sf9 cells. Culturing cells in a 50/50 Fresh/Conditioned media formulation showed increased cell viability when compared with 100% conditioned media. The addition of FBS drastically improved cell viability after 1 week. However, the difference between 2% and 10% FBS supplementation was not significant. The genetic components of the design were assembled via Splice Overlap Extension PCR and Gibson Assembly protocols. However, complications during the construction of the genetic architecture meant that the design was not seen to completion. Nevertheless, the lessons learned throughout this work will aid in future attempts to develop the proposed system.