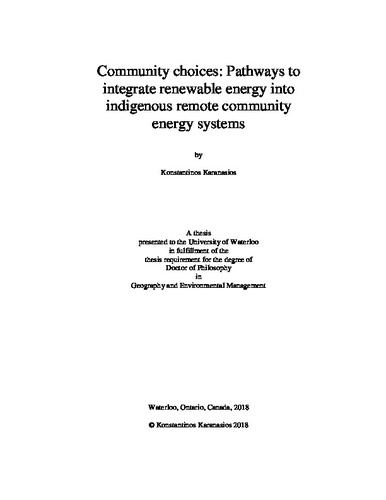 Community owned renewable energy generation (electricity and heat) is often associated with improving reliability and affordability of supply, increasing local wellbeing, empowering through new revenues, business opportunities and capacity building, and reducing environmental impacts. Similar motivations for renewable energy projects are observed in the case of Canadian remote indigenous communities that target activities that improve their socioeconomic conditions and mitigate socioeconomic-political-cultural impacts resulting from colonization, while having minimal influence on the environment and traditional activities. However, the slow transformation of remote indigenous communities’ diesel-powered electricity systems through the introduction of renewable energy technologies (RETs) between 1980 and 2016 called for an examination of factors that influence the transition to more sustainable electricity options. The purpose of this dissertation was to improve understanding of the technical, contextual, and social complexity associated with the introduction of RETs into Canadian remote indigenous community electrical systems, explain the diffusion of RET projects within these systems to date, and examine the implemented governance processes and how these processes were modified to encompass indigenous perspectives. Improved understanding enables identification of pathways and development of policy recommendations for the transition to more sustainable energy systems. These objectives were achieved through: (a) a review of prior academic and non-academic documents on the introduction of RETs into remote communities, the examination of 133 community electrical systems in Yukon, NWT, Nunavut, British Columbia, Ontario, Quebec and Newfoundland and Labrador, and the identification of RET projects undertaken between 1980 and 2016, (b) an empirical study in the context of northern Ontario, Canada, and (c) an analysis of events related to the introduction of RETs through, first, the multi-level perspective (MLP) approach to explain the non-linear uptake of RET projects in remote indigenous communities and identify macro- and meso-level factors that influenced the deployment, and, second, the technological innovation system (TIS) approach to examine policy measures and activities in Northwest Territories and Ontario and generate insights on micro-level factors that led to the development of an increased number of mostly solar projects in these provinces between 2009 and 2016. The key findings of the research suggest that the deployment of RET projects was influenced by the institutional complexity of indigenous electrical systems, the diversity of stakeholder perspectives (government, utilities and indigenous peoples) on community electricity generation and the challenges that the introduction of RETs is expected to address, and the uncertainty associated with both the future “long term” structure and governance of provincial and territorial electricity generation systems and the financial viability of small-scale off-grid applications. Furthermore, the shift from utility-driven to community-driven RET projects in the period examined was explained through the interplay between tensions developed from new legislation favouring indigenous aspirations and sustainability concerns, governmental and utility internal stresses expressed through governmental targets and supporting policies for renewable electricity alternatives, and pressures from technological advances. Governments engaged in a dialogue with indigenous people and other participants, which resulted in a policy shift from capital financing to capabilities improvements and network formation, and, finally, to regulatory and financial arrangements supporting indigenous demand for community owned electricity generation. This research contributes to scholarship and provides insights to policy design. First, it improves understanding of the nature of the problem associated with the introduction of RETs into Canadian remote indigenous communities by providing a description of the origins, dynamics, extent, and pattern of transition and the associated technical, contextual, and social complexity. Furthermore, it contributes to the field of sustainability studies by providing research using both the MLP and TIS concepts in the context of remote Canadian indigenous communities and evidence, first, that the proposed complex causal mechanisms were present and performed as predicted, and second, that regional institutional structures and networks (or the lack of them) played an important role in the diffusion of RET projects. Finally, this research suggests that a transition management approach involving the co-development of policies supportive of indigenous aspirations, experimenting and learning, and evaluation and adjustment of policies based on the acquired knowledge, may lead to an increased number of RET projects in remote indigenous communities. Accordingly, policy related recommendations include the need for (a) establishing specific targets, policies, and programs for the reduction of diesel consumption and the introduction of RETs (b) policy development in a collaborative and negotiated way with indigenous people, and (c) effective coordination of interventions for the creation of networks that would improve interactions and learning.