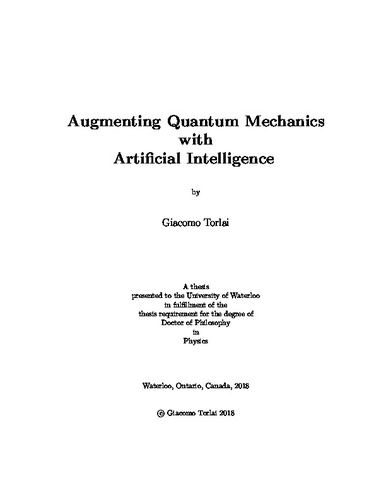 The simulation of quantum matter with classical hardware plays a central role in the discovery and development of quantum many-body systems, with far-reaching implications in condensed matter physics and quantum technologies. In general, efficient and sophisticated algorithms are required to overcome the severe challenge posed by the exponential scaling of the Hilbert space of quantum systems. In contrast, hardware built with quantum bits of information are inherently capable of efficiently finding solutions of quantum many-body problems. While a universal and scalable quantum computer is still beyond the horizon, recent advances in qubit manufacturing and coherent control of synthetic quantum matter are leading to a new generation of intermediate scale quantum hardware. The complexity underlying quantum many-body systems closely resembles the one encountered in many problems in the world of information and technology. In both contexts, the complexity stems from a large number of interacting degrees of freedom. A powerful strategy in the latter scenario is machine learning, a subfield of artificial intelligence where large amounts of data are used to extract relevant features and patterns. In particular, artificial neural networks have been demonstrated to be capable of discovering low-dimensional representations of complex objects from high-dimensional dataset, leading to the profound technological revolution we all witness in our daily life. In this Thesis, we envision a new paradigm for scientific discovery in quantum physics. On the one hand, we have the essentially unlimited data generated with the increasing amount of highly controllable quantum hardware. On the other hand, we have a set of powerful algorithms that efficiently capture non-trivial correlations from high-dimensional data. Therefore, we fully embrace this data-driven approach to quantum mechanics, and anticipate new exciting possibilities in the field of quantum many-body physics and quantum information science. We revive a powerful stochastic neural network called a restricted Boltzmann machine, which slowly moved out of fashion after playing a central role in the machine learning revolution of the early 2010s. We introduce a neural-network representation of quantum states based on this generative model. We propose a set of algorithms to reconstruct unknown quantum states from measurement data and numerically demonstrate their potential, with important implications for current experiments. These include the reconstruction of experimentally inaccessible properties, such as entanglement, and diagnostics to determine sources of noise. Furthermore, we introduce a machine learning framework for quantum error correction, where a neural network learns the best decoding strategy directly from data. We expect that the full integration between quantum hardware and artificial intelligence will become the gold standard, and will drive the world into the era of fault-tolerant quantum computing and large-scale quantum simulations.