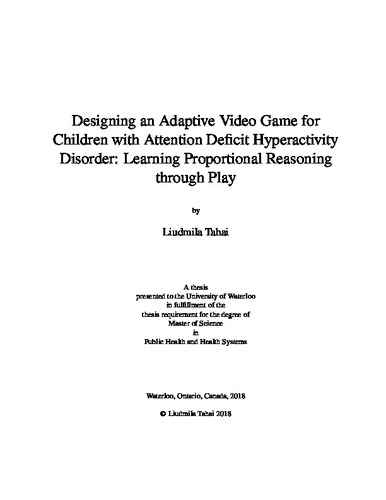 Attention Deficit Hyperactivity Disorder (ADHD) is a neurodevelopmental disorder marked by symptoms of inattention and/or hyperactivity and impulsivity. Many children with ADHD suffer from poor reasoning and decision-making that impedes their readiness for learning. Proportional reasoning is an important skill in everyday decision making, and it is essential for children’s academic success, which is linked to higher self-esteem, lower levels of anxiety and depression, better family and peer relationship. Therefore, the goal of the thesis was to design an educational video game for children with ADHD that will teach them proportional reasoning through enjoyable play. The second goal of the thesis was to verify whether the designed game, which uses a low-cost mobile electroencephalogram (EEG)-based device to adapt the in-game difficulty based on players’ attention, makes the learning of proportional reasoning faster through faster progression and helps players to maintain their attention span for a longer period of time. To answer my research questions, I developed an in-game difficulty level model for the experimental game that consists of 4 designed conditions, which are a combination of the game trial win or loss with focused or not focused attention states. The faster progression is granted after at least 2 wins in the first 3 trials of the same difficulty level. To evaluate the game design and my adaptive difficulty algorithm, I performed a formal experiment. The participants (n=20), randomly assigned to two groups (ADAPTIVE and CONTROL), were asked to play the designed videos game while wearing a mobile EEG-based headset MindWave by Neurosky. During the study, I collected players’ brain activity data, such as attention and meditation states, and the users’ evaluations of the game experience and the difficulty of each level. I also conducted a qualitative analysis of players’ in-game behavior. The data analysis revealed a strong negative correlation between the total number of games played and the average time spent on the task in the CONTROL group, (r(10) = -0.72, p = 0.02), suggesting the presence of a learning effect that supports the ultimate goal to design a game that teaches players proportional reasoning. Although in the ADAPTIVE group we did not observe statistical difference between these parameters, the ADAPTIVE game design showed a potential to be more efficient in teaching proportional reasoning since the players were able to finish the gameplay in a shorter period of time having attention, meditation and flow states no different from the CONTROL group. The quantitative study findings in combination with the qualitative analysis of players’ in-game behavior pointed to the necessity of the minor level design modifications that might improve the quality of game experience. Players’ improved game satisfaction in combination with the already successfully implemented learning component, based on the presence of learning effect in the groups, will make the learning process an enjoyable experience.