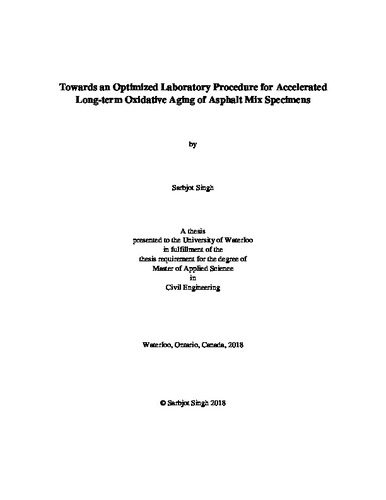 Pavement infrastructure forms one of the most important mode of passenger and freight transportation and trade between Canada and the United States, and plays an important role in national economy as a measure of Canada’s global development index. For asphalt pavements, the durability of this infrastructure is highly dependent on the constituent asphalt binder, which even though comprises only 4-6 percent of the asphalt mixture, governs the behavior and has a great impact on its rheological characteristics. Like most organic materials, asphalt binder evolves physically and chemically over time (referred to as aging or age hardening) owing to a number of aging mechanisms. Gradual oxidation resulting in formation of oxygen containing functional groups is one of the primary causes of asphalt binder hardening, however it is not the only mechanism attributed to aging. Other factors such as volatilization of lighter fractions, molecular reorientation, absorption of oily components by mineral aggregates, photo-oxidation and so forth could all lead to hardening of asphalt binder. From a design point of view, it is very important to understand these aging mechanisms and their subsequent effects on binder rheological properties to enhance pavement longevity and reduce the time period to rehabilitation and/or replacement. Short-term aging is the term given to changes in binder properties during mixing at an asphalt plant and field compaction, and is mainly attributed to loss of volatiles or lighter oily fractions and high temperature oxidation. Long-term aging on the other hand, refers to rheological changes that occur during the pavement service life and is mainly attributed to oxidation at ambient temperatures. However, it must be noted that the rate of change, resulting chemical composition and rheological properties vary for different types of binder and even for same type of binder dependent on various environmental factors such as temperature, humidity, solar radiation (including ultraviolet and infrared) etc. as well as asphalt mixture properties such as air voids (distribution and interconnected voids), asphalt film thickness, type of aggregates, filler content and gradation. Over the years, several laboratory procedures have been developed in a bid to accelerate the aging process while trying to accurately mimic the effects of construction and in-service conditions. For asphalt binder, the most commonly used methods are RTFOT (Rolling Thin Film Oven Test) and PAV (Pressure Aging Vessel), which simulate short-term and long-term aging respectively. For asphalt mix, SHRP methods are generally employed with STOA (loose-mix at 135°C for 4hrs) for short-term and LTOA (compacted samples at 85°C for 120hrs) for long-term aging. The acceleration in aging in these procedures is achieved by applying excessively high temperatures and/or pressures for extended periods of time. Previous studies have suggested that such extreme conditions (in comparison to actual service conditions) could alter the kinetics of oxidative aging in terms of the types and concentration of oxidation products formed, hence leading to different rheological and mechanical properties in comparison to those encountered after actual in-service pavement aging. The main aim of this research project is to study the effects of less considered environmental degradation factors such as solar radiation (in particular UV) and rainfall on age hardening of asphalt binder, and hence optimize a laboratory accelerated aging procedure which provides a better representation of actual conditions encountered by asphalt pavements in their service life. To this end, compacted asphalt mixture samples were subjected to three different types of conditioning procedures 1). Control conditioning procedure which is based on current widely used practices; and 2). and 3). Atlas Weatherometer and Bespoke Chamber conditioning procedures which are both based on limiting temperature conditioning and achieving acceleration in aging by applying cycles of water spray followed by drying under irradiation. The reason for choosing compacted mixture specimens was to avoid any issues related to compactability, and cohesion and adhesion for subsequent laboratory testing, which was carried out to characterize mixture rheological behavior (Complex Modulus) and to determine changes in fracture potential of aged mixtures (SCB). Another approach that was utilized was extraction and recovery of asphalt binder from aged mixtures, which was then subsequently subjected to rheological (Complex Modulus), chemical (FT-IR), and performance (LAS and MSCR) testing to understand the effects of age hardening. The effect of oxidative aging for both asphalt binders and asphalt mixtures was characterized by a constant increase in modulus values (|G*| and |E*|) and a decrease in phase angle values (δ). In terms of rheological behavior, this can be described as an increase in stiffness along with a greater proportion of elastic behavior, which lead to an increase in resistance against rutting but also a reduction in pavement durability associated with brittleness and reduced resistance against fatigue. A difference in kinetics of aging along with variations in rheological behavior were also noticed for control conditioning procedure where asphalt binder and mixture samples were subjected to comparatively high temperatures and/or pressures. The effect of water conditioning was also studied, indicating an accelerating effect on the photo-oxidation of asphalt mixtures. This can be attributed to the water solubility of the chemical products of photo-oxidation, which are washed away thus exposing further layers to oxidation. Conclusions hence drawn based on comparative analysis of the results were then used to recommend Bespoke Chamber conditioning procedure (with repetitive cycles of UV and water conditioning), which was able to reproduce desirable levels of natural age hardening in compacted asphalt mixture samples while satisfying all of the requirements for an ideal conditioning procedure.